German Chocolate Cake. You know what I’m talking about, a big impressive chocolate layer cake with that distinctive coconut pecan frosting. It always seemed a bit intimidating to me and I had never attempted to make one before. My husband has a texture thing about shredded coconut. So with all of the layers of shredded coconut on this cake, and my unfounded trepidation, it just wasn’t happening. But then, a good friend of mine had a birthday coming up and I asked around to see what his favourite cake might be. Yup. You guessed it, German Chocolate Cake. So I did a bit of recipe research on the good old interwebs and found one that I was sure would produce a fantastic cake. 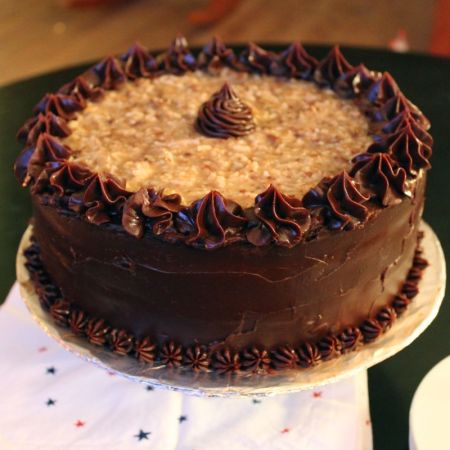 I also uncovered a few interesting facts about this confection. Turns out it isn’t German at all! Nope. It is a total German poser! In actuality, this cake is so American it might as well be whistling Yankee Doodle Dandy! You see, back in 1852 there was an American chocolate maker whose name was Sam German. Now he invented a dark baking chocolate for Baker’s Chocolate Company. In honour of Sam, the Baker’s company christened this new chocolate as “Baker’s German’s Sweet Chocolate”. Fast forward 105 years later to 1957, when a homemaker from Dallas Texas published a recipe for “German’s Chocolate Cake”. This recipe became very popular and various newspapers across the country published the recipe. It essentially went, as we would say today, viral causing Baker’s Chocolate sales to increase by as much as 73%. The thing is that some where along its meteoric rise to fame, that possessive “German’s” changed to just “German”. Ahhh….so it became known as “German Chocolate Cake”. Thus conveying it’s false Germanic pedigree to the masses.

But enough of my historic ramblings, let’s get back to talking about this incredibly decadent cake today. This wonderful recipe comes from the Brown Eyed Baker who adapted it from David Lebowitz. With it you will be able to create a big tall dark chocolate four layer cake. Each of these rich chocolate layers are brushed with a rum syrup which not only intensifies the chocolate flavour but keeps the cake incredibly moist. After being drenched in rum syrup the layers are filled with a custard based toasted coconut pecan frosting. And then, as if anything else was needed, the sides of the cake are covered with a bittersweet chocolate ganache that is just to die for!

This stunning cake is actually easy to make, though a bit time-consuming. But with just one bite, you will know it was all worth it! Needless to say, my friend was delighted with his German Chocolate Birthday Cake. Indeed my coconut adverse husband even happily ate a slice. But don’t wait for a special occasion to make this cake. Believe me, any day you choose to make this spectacular cake will instantly be transformed into a special occasion. And in the meantime, let’s all raise a glass to Sam German whose lovely German’s chocolate made it all possible…

For the Rum syrup:

For the Chocolate Icing:

Make the Cake: Preheat the oven to 350 degrees F. Grease two 9-inch cake pans, then line the bottoms with rounds of parchment paper. Sift together the flour, baking powder, baking soda and salt; set aside.

Melt the semisweet and unsweetened chocolates together with the 6 tablespoons of water in a small bowl. Use either a double-boiler or microwave on 50% for 30 seconds to 1 minutes. Stir until smooth, then set aside to cool to room temperature.

In the bowl of an electric mixer, beat the butter and 1¼ cup of the sugar on medium-high speed until light and fluffy, about 5 minutes. Reduce the mixer speed to medium and beat in the melted chocolate until combined, scraping the sides of the bowl as necessary. Beat in the egg yolks one at a time, beating well after each addition.

In a separate bowl, beat the egg whites on medium-high speed until they hold soft peaks. Slowly add the ¼ cup of sugar and beat until they form stiff, glossy peaks.

Using a rubber spatula, gently fold one-third of the egg whites into the cake batter to lighten it, then fold in the remaining egg whites just until there’s no trace of egg white visible.

Divide the batter into the 2 prepared cake pans, smooth the tops, and bake for about 45 minutes, until a toothpick inserted into the center comes out clean. Cool the cake layers completely (leave them in the pans). While the cakes are baking and cooling, make the filling, syrup and icing.

Make the Filling: Stir together the heavy cream, sugar and egg yolks in a medium saucepan. Put the butter, salt, pecans and coconut in a large bowl and set aside. Heat the cream mixture and cook, stirring constantly (scraping the bottom of the pan as you stir) until the mixture begins to thicken and coats the back of a spoon (an instant-read thermometer will read 170 degrees F.). Pour the hot custard immediately into the pecan-coconut mixture and stir until the butter is melted. Cool completely to room temperature.

Make the Rum Syrup: In a small saucepan, heat the water and sugar, stirring occasionally, until the sugar has melted. Remove from heat and stir in the dark rum. Set aside until ready to use.

Make the Chocolate Icing: Place the chopped chocolate, corn syrup and butter in a medium bowl. Heat the cream in a small saucepan over medium heat until it just begins to boil. Remove from heat and pour over the chocolate. Let stand one minute, then stir until smooth. Cool to room temperature.

Once the filling and icing are both cooled to room temperature, refrigerate for 1 hour.

This entry was posted on Wednesday, April 3rd, 2013 at 11:01 am and is filed under Cake, desserts, Recipes. You can follow any responses to this entry through the RSS 2.0 feed. You can leave a response, or trackback from your own site.