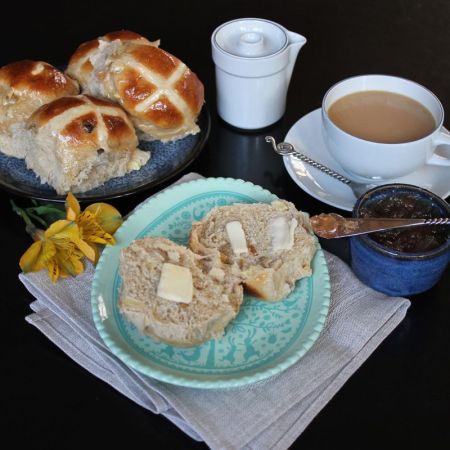 One a penny, two a penny! Hot Cross Buns! That’s right…it’s time for the Hot Cross Buns to make an appearance. I’m sure you’ve been seeing them everywhere, but I must say, look no further! The best Hot Cross Bun recipe can be found right here. This year I made buns with a bit of a twist from the old traditional ones I usually do and baked Apple & Cinnamon Hot Cross Buns. Let me just say, they are dee-lish! They are incredibly moist and bursting with apple and cinnamon flavour, most likely due to a fresh homemade apple cinnamon compote which is added to the dough along with golden raisins, and  bits of dried apple. And if that doesn’t tempt you, as soon as these little buns emerge from the oven, they are drenched in a syrupy apple cinnamon glaze. Do I have your attention now? Yum, yum, YUM!

On Good Friday I always make Hot Cross Buns. I just have to do it. It’s like I have no choice. I find all of the lore surrounding them fascinating! Hot Cross Buns are traditionally eaten on Good Friday and the cross that adorns them is said to be a symbol of the Crucifixion. However, these little buns may even pre-date Christianity. The cross could possibly have been made in honour of the Saxon Goddess Eostre and in that case would have symbolized the four quarters of the moon. The Buns that are actually baked on Good Friday are said to have quite an array of powers besides their delicious taste. For one thing, these pastrys will never get moldy. I actually have been putting a Good Friday baked bun aside for several years now and I can attest, they do not mold! 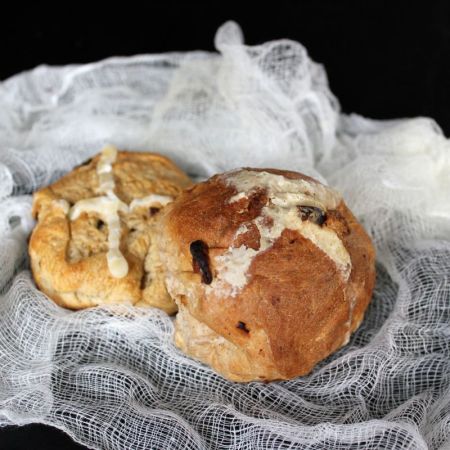 Preserved Buns from Easters past!

Furthermore, if you hang one in your kitchen, it will not only protect your household from fires but will also work as a charm to ensure all of your bread baking endeavours will be successful. Indeed, a dried bun from the previous year, also has medicinal properties. You can grate a bit of it into the liquid of your choice to make a restorative elixir that will help sick folks regain their health. This powder can also be applied directly to wounds with the same curative results. Amazing! 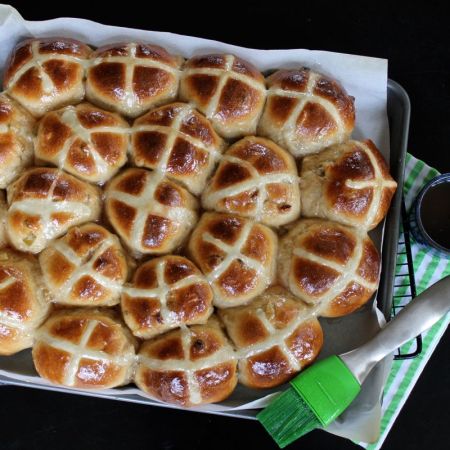 Now I must stress that only Hot Cross Buns baked on Good Friday itself have these powers. So most likely you’re going to have to bake them yourself on the actual day to ensure your buns are filled with these magical properties. Hot Cross Buns are made with yeast, so just keep in mind, there are going to be a couple of rise times involved. You need to plan for it and unless you plan on getting up at o’dark thirty to start working on them, you probably won’t have them available for breakfast that morning. But you could have them ready by elevenses! They are a bit of work, but believe me, these buns are so worth it! And I had the most pleasant surprise. When I finished glazing the Hot Cross Buns I actually had some of the Apple Cinnamon Syrup left over. I set it aside and was quite happy to find that it had actually set up upon cooling, leaving me with a scrumptious jelly! Yup….Apple & Cinnamon Hot Cross Buns with Apple Cinnamon Jelly. It just keeps getting better! You’ve gotta make these delicious buns today! 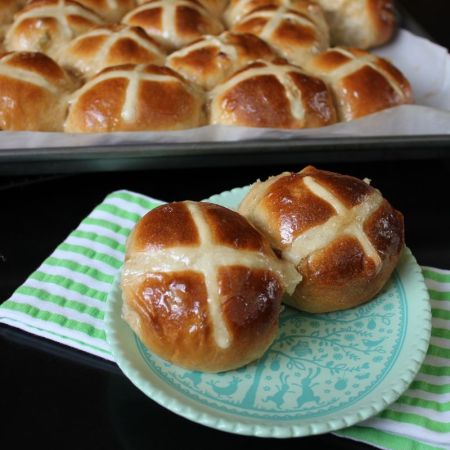 Start with the compote: combine sugar and water in a medium saucepan, then squeeze in juice of half the lemon and stir over medium-high heat until sugar dissolves. Meanwhile, cut remaining lemon half into 3mm-thick slices, add to saucepan with Granny Smith apples and cinnamon quill. Bring to the simmer, reduce heat to medium and cook until lemon and apple are translucent (20-25 minutes). Strain, reserving fruit and syrup separately. When cool enough to handle, dice lemon, combine with apple. Remove the cinnamon quill, add it to the syrup and set aside.

Combine milk and butter in a small saucepan, warm over low heat until butter melts and mixture is lukewarm. Whisk in egg, then add milk mixture to flour, stirring to form a soft dough.

Turn onto a lightly floured surface and knead until smooth and elastic (8-10 minutes) – I used my Kitchen Aid with the dough hook to knead the dough; gradually added 1 cup flour because the mixture was too wet. You want the dough to pull away from the sides of the bowl, so just slowly add flour as you are kneading until you see this.
Place in a lightly buttered bowl, cover and stand in a warm place until doubled in size (30-40 minutes). Meanwhile, line a large baking sheet with parchment paper.
Knock back dough, divide into 20 even pieces, then knead each piece into a smooth ball. Arrange dough in a large rectangle or concentric circles, placing balls side by side onto prepared sheet, leaving 1cm between each for dough to expand. Cover with a tea towel and stand in a warm place until doubled in size (30-40 minutes).
Preheat oven to 220°C/428°F. Combine the 1/3 cup extra flour and ¼ cup (60 ml) cold water in a bowl and stir to a smooth paste. Spoon into a piping bag fitted with a small plain nozzle and pipe a cross shape onto each bun.

Bake for 10 minutes, reduce oven to 200°C/400°F and bake until golden and buns sound hollow when tapped (10-12 minutes).
Meanwhile, combine reserved syrup and cinnamon quill in a small saucepan and stir over medium heat until syrupy. Brush thickly over hot buns, then transfer buns to a wire rack to cool.

This entry was posted on Saturday, March 30th, 2013 at 11:00 am and is filed under bread, Breakfast, Easter, Holidays, Recipes. You can follow any responses to this entry through the RSS 2.0 feed. You can leave a response, or trackback from your own site.