I really love that we have lots of red foxes in the neighborhood. I often see them when I’m walking the dog or occasionally when they just happen to be running through the yard. I think they’re really very handsome creatures. However, they do have an annoying habit of sitting in our yard and “barking” in the wee hours of the morning. If you’ve never heard the sound they make, take a listen. It isn’t at all like a dog’s bark, but more like a scream. I assure you it is quite eerie and un-nerving when it wakes you up from a sound sleep. Not to mention, Gimlet goes absolutely berserk at that point.

I know I’m quite late getting around to adding this post. I apologize, but it seems that Jay and I have somehow developed rather frail constitutions of late. In the past we would have had no problem traveling to New York for a big, posh party at the Waldorf and then zipping back down to DC for another fabulous Halloween party the following day. However, now it seems that we just can’t handle such excitement. Jay blames the state of his failing immune system on the infamous bog flu which he, along with several other of our close friends, contracted while attending at our marriage celebrations in Ireland in April. I supose that could be it, indeed perhaps I would prefer that explanation. However, I’m afraid we might just be getting…..dare I say it?……OLD! Anyway, I seem to have recovered enough from our travails to post  a few tidbits about our most recent adventures.

Every year Bette Midler hosts a Halloween party at the Waldorf Astoria to benefit the New York Restoration Project. This group endeavors to make New York a greener place by adding parks, trees, etc. Jay’s friend Tony and his fiancee Maya are active with this group and were kind enough to give Jay and I tickets to the party this year. Costumes were mandatory and we wore our steampunk outfits. There were about 1000 folks attending this event, I understand that there were quite a few celebrities there. We really weren’t able to recognize any because of the fabulous costumes. There was a cocktail party first, followed by a sit down dinner. Then Bette Midler and Whoopi Goldberg did their best to auction off some trees for the Project. Our favorite part of the evening was when Crosby, Stills and Nash took the stage after dinner. 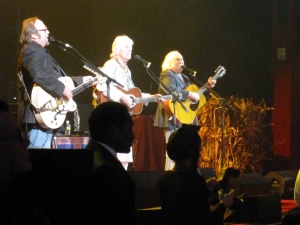 It was the first time I had seen them live. Jay had seen them many times before but not in such an intimate setting. Of course there was a big “after party” following. We had a great time! Thanks Tony and Maya! 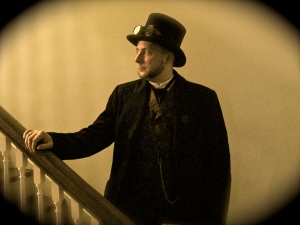 The next day we travelled back down to DC and went to Brian and Phil’s Rugby Team Halloween Party.

Capitol Hill was not as busy as usual on Halloween since it was raining. However,  a little rain certainly did not dampen the spirits of the Rugby team. As usual, Brian and Phil were stellar hosts! The house looked awesome and Phil had baked the BEST apple pie Jay has ever tasted!