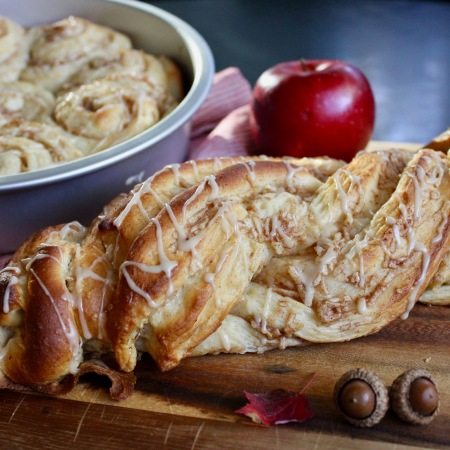 Now here is one lovely recipe to add to your Fall baking repertoire – Cinnamon Apple Twist Bread and/or Cinnamon Apple Rolls. You will love how scrumptious your house smells when it is filled with the cozy, comforting aroma of cinnamon and apples. But you know what you’ll really love? How delicious this soft, tender and sweet bread tastes. I’ll consider you pretty dang accomplished if you can keep from eating it all in one sitting! 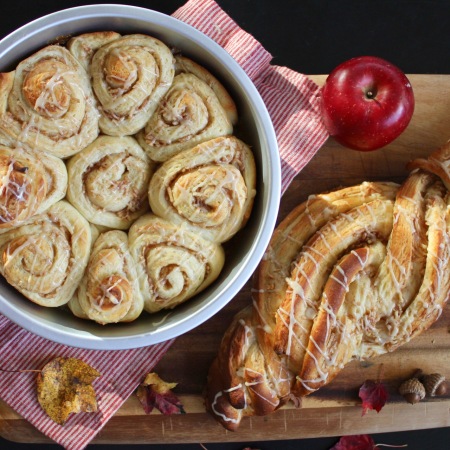 I know you might be thinking that this bread looks a bit complicated. But don’t fear. It is actually pretty easy to make. I used to be awfully intimidated by any recipe that called for yeast. Now I don’t even give it a second thought. It really isn’t that hard and the results for your efforts are so worth it. So to make this bread have such a lovely swirled appearance, you simply roll your filled dough up as though you were making a jelly roll or cinnamon buns. 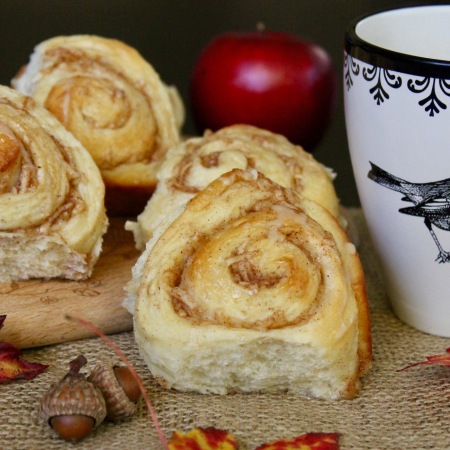 Then rather than cutting the individual rolls, you cut the roll in half lengthwise and twist the two pieces together. Now I will admit, the filling does leak out a bit, but don’t freak out, there is still plenty of filling left inside. The day is not lost. I will say that the original recipe called for a King Arthur Flour product called Clear Jel (link provided below). Apparently this powder thickens fillings and sauces without giving them a starchy taste. I didn’t have any on hand, though will be getting some in my next King Arthur Flour shipment, so I used flour as the thickener for this batch. Since I already know I will be making this amazing bread again, I’ll try that Clear Jel out next time. 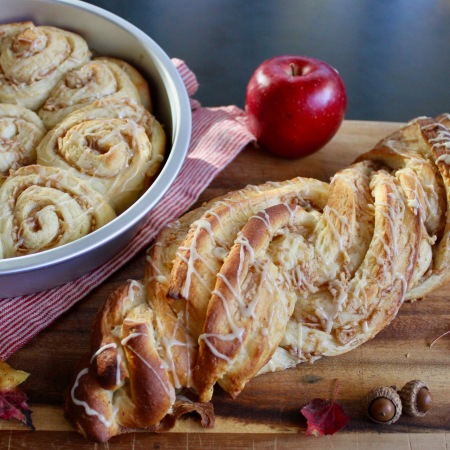 This recipe is pretty versatile too in that you can make either two loaves of twisted bread, two pans of apple cinnamon rolls or one loaf of twisted bread and one pan of rolls. So if you are really anxious about trying the twisty bread, make the rolls. They are pretty easy-peasy. 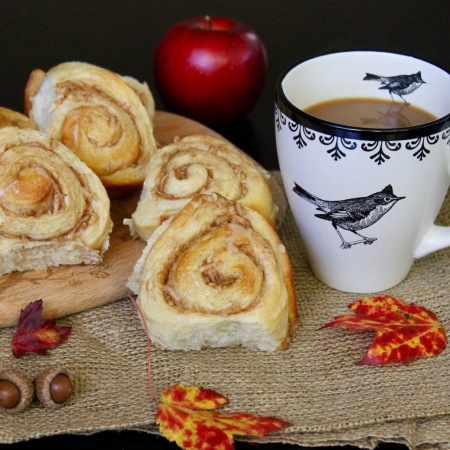 Your family will be thrilled with this delicious Fall treat! And don’t forget, Thanksgiving is right around the corner. How amazing would it be to wake up with that turkey hang-over the day after and have a batch of this Cinnamon Apple Bread waiting for you? Just saying… 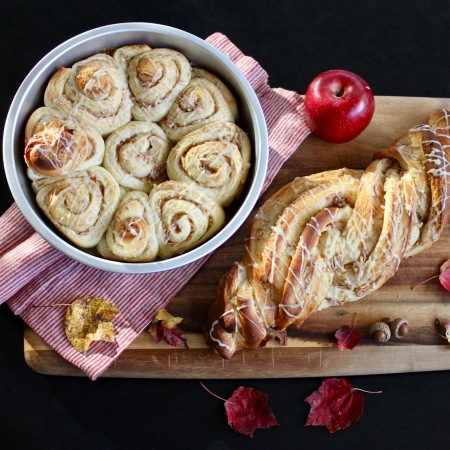 To make the dough: Whisk together all of the dry ingredients , then add the butter, flavor, egg, and milk, mixing until a shaggy dough forms. Let the dough rest for 30 minutes; this resting period allows the flour to absorb the liquid fully, making it easier to knead.

Knead the dough for about 10 minutes; it should feel slightly sticky and soft. Add a couple of tablespoons of water if the dough feels firm or dry. Place the dough in a greased bowl, turning to coat. Cover the bowl, and let the dough rise until it’s almost doubled in bulk, about 1 1/2 to 2 hours. The amount of time this takes will depend on the temperature of your kitchen; yeast works the fastest at about 85°F, but we prefer the flavor the bread gets from a longer, cooler (about 70°F) rise.

Toss the grated apple with the lemon juice, then add that to the ClearJel and sugar mixture. Mix well, and set aside.

To assemble the loaf: Gently deflate the risen dough and turn it out onto a lightly floured or greased work surface. Fold it over once or twice to remove the excess gas. Divide the dough in half. Roll the first half into a 10″ x 12″ rectangle. Spread half the filling over the rolled-out dough, leaving a 1/2″ margin clear of filling along all sides.

Starting with a long side, roll the dough into a log, taking care to pinch the edges closed as you are rolling. This will help keep the filling from leaking out. Finish your roll with the seam on top, rather than underneath of the roll and then seal that edge. Use a pizza cutter or sharp knife to cut the log in half lengthwise. Place the half-logs, filled side up, side by side on a well-greased or parchment-lined baking sheet. Keeping the filling side up, twist or “braid” the two logs together, working from the center to each end. Pinch the ends together. Repeat with the second piece of dough. Cover the twists lightly, and set them aside to rise for 1 to 2 hours.

To make rolls: Follow the directions above to the point where you’ve rolled the dough into a log. Repeat with the remaining piece of dough, then cut each log into 1″ slices. Some folks recommend a sharp knife or a pizza cutter to cut the rolls. I prefer using a strand of unflavored dental floss. Place the slices cut side up in well-greased or parchment-lined pans, placing them close together (though not touching) for soft-sided rolls, or about 2 inches apart for crustier rolls. Allow the rolls to rise until they’re puffy.

To bake the bread: Bake the loaves in a preheated 350°F oven for 30 to 35 minutes (or the rolls for 18 to 20 minutes), until they’re lightly browned. Check the loaves after 20 minutes and tent with aluminum foil if they’re browning too quickly around the edges. Remove the bread from the oven and allow it to cool for about 1 hour before glazing and serving.

To make the glaze: Mix together all of the glaze ingredients. Drizzle over the loaves or rolls once they’re cool.

Cinnamon Apple Twist Bread and Rolls brought to you by: Runcible Eats (www.leaandjay.com)

This entry was posted on Friday, November 18th, 2016 at 1:03 pm and is filed under bread, Breakfast, brunch, desserts, Recipes. You can follow any responses to this entry through the RSS 2.0 feed. You can leave a response, or trackback from your own site.