Hang on just one daggum minute! Did I read that right?! Bacon Wrapped Stuffed Sausages? BaconWrapped..Stuffed…Sausages. Can it be true? Why yes, yes it can. And you can make up some of these decadent delights quicker than you can imagine. You simply take a pork sausage, stuff it with some delicious bread stuffing – in this kitchen that would be cornbread stuffing – and then wrap the whole thing in bacon. Sounds incredible huh? Pork stuffed with cornbread and wrapped in more pork! Where have you been all of my life? 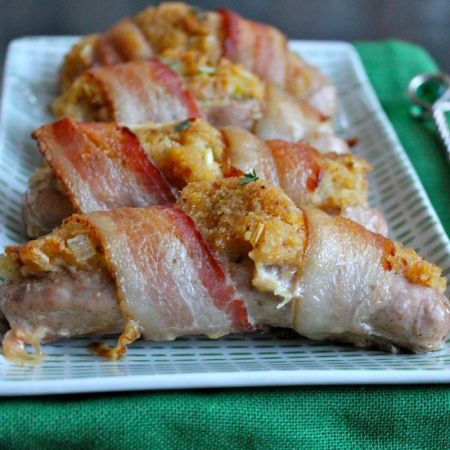 Apparently Stuffed Sausages hale from Northern Ireland, particularly originating at the butcher counter of McAnerney’s Supermarket in Armagh city, County Armagh. I do not remember seeing these around in the Republic, but they might be there as well and I just wasn’t lucky enough to come across them. The only tricky bit about making these in the US was looking for an appropriate sausage. Now we have many pork sausages here, but they are quite different from those found in Ireland. In Ireland, the meat of the sausage is ground much finer and the spices are less pronounced being more herby than peppery. Although I was not able to get ahold of any Irish sausages here in Virginia, I was able to find a local butcher who makes Cumberland sausage style bangers. Originating in Cumbria England, Cumberland sausage is a peppery pork sausage in which the meat is chopped rather than minced, giving it a texture which falls somewhere between Irish and US sausages. I’m sure you can substitute in your favourite local sausages for this recipe, but take care to look for something larger than a traditional breakfast link so that you will be able to stuff it. 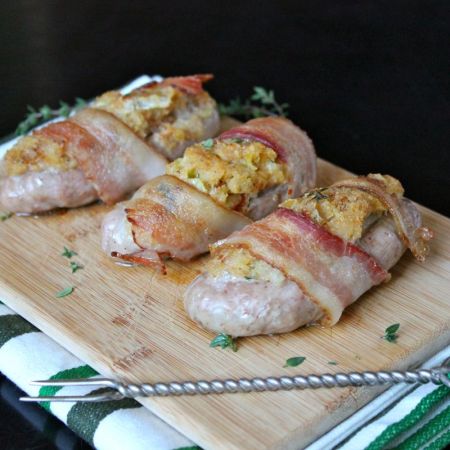 As for the stuffing, the original recipe which I found over at Wee Kitchen, called for a simple bread stuffing. But I know my husband very well, and therefore know he is all about cornbread. So I made a cornbread stuffing. You should make whatever stuffing happens to be your favourite. Once you’ve got the sausages split and stuffing made, it’s quite easy from there. Stuff those sausages, wrap them in bacon and pop them into the oven.

In about 30 minutes you will have achieved bacon wrapped nirvana! I served these Stuffed Sausages over mashed potatoes with a quick and easy onion pan-gravy. They are also to-die-for simply skewered on a fork. They were a huge hit around here and I have no doubt folks would be thrilled to see them at your St. Patrick’s Day celebrations.

Melt butter in large saucepan. Add onions and celery and cook until softened. Remove from heat.

Add broth and stuffing mix to saucepan along with thyme leaves. Mix until all of the stuffing is moistened. Set aside.

Slice a channel down the center of each sausage link, about 3/4 of the way through. Take a large spoonful or two of the stuffing mixture and place it into the slit.

Wrap each stuffed sausage with one slice of bacon. Try to wrap the sausage in such a way that both ends of the bacon are on the bottom side of the sausage.

Extras: For the simple onion pan-gravy I mentioned: Chop one large onion and one clove of garlic. Saute them in the drippings from the bacon wrapped stuffed sausages until tender. Add 2 tablespoons of all-purpose flour and 1 teaspoon of balsamic vinegar. Cook for 30 seconds. Add two cups of beef broth and whisk continuously until the gravy begins to thicken. Reduce the heat to low and add salt and pepper to taste.