Now that Halloween is over and I’ve got all those spooky treats out of my system, I can get back to my Fall  fresh apple obsession. This recipe is part two of my covert mission to hide some morsels of the Harvest Apple Challah bread that I made a short time ago, for the purpose of making other tasty treats with it. First I managed to make some lovely Harvest Apple French Toast with a bit from my hidden stash. Then I made these two charming little ramekins of Harvest Apple Bread Pudding. And I couldn’t just stop there… Oh No! I went ahead a whipped up some mouth-watering Salted Maple-Caramel Sauce to drizzle over the top. The recipe below actually makes about 1 cup of the stunning salty-sweet concoction, which is quite a bit more than you’ll need here, but you’ll be very happy to have it around. This sauce is really quite good and goes well over ice cream, baked apples, pancakes, you name it. It’s even good squirted right out of the bottle ( not that I would be doing that… in public anyway 🙂 ). I did drizzle some right over the tops of my Harvest Apple Bread Pudding though. The result was absolutely scrumptious. 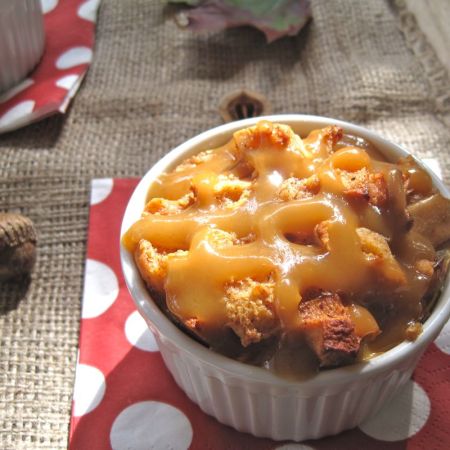 This recipe, like my previous Harvest Apple French Toast, calls for “Maple Sugar”. Maple Sugar is made from the sap of the sugar maple tree and is significantly sweeter than granulated sugar. It can be found in the sugar section of most large grocery stores, or if not in your town, it can be order online. (I’ve seen it on Amazon.) I mentioned that you could swap it out for granulated sugar if you wanted, but you might want to increase the sugar amount a bit and probably won’t get as mapley a taste. However, the sauce does call for imitation maple extract, so that might just be enough for you. 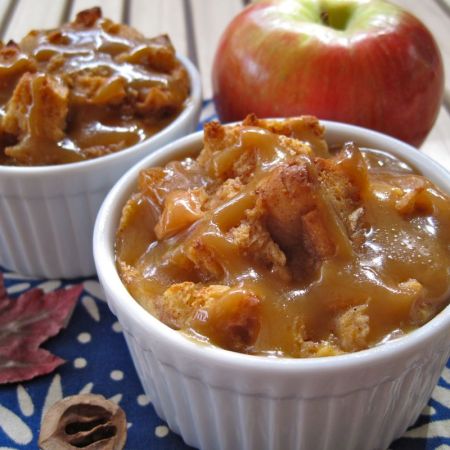 Once my husband got his hands on this dessert, all secrecy and hoarding behaviour on my part was forgiven. (He actually didn’t even suspect a thing…I’m that good!) We devoured these puddings in no time flat! So if you haven’t made the Harvest Apple Challah yet, get baking! You don’t miss out on this delicious Harvest Apple Bread Pudding! 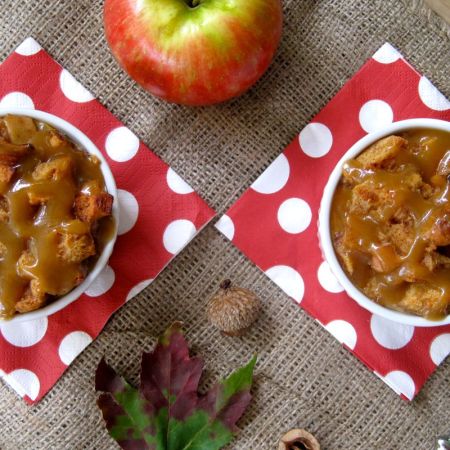 Preheat oven to 350°F. Arrange bread cubes in a single layer on a baking sheet. Bake for 5 minutes, or until toasted.

Preheat oven to 325°F. Butter the inside of two 7-8 oz. ramekins. Divide the chilled bread/egg mixture evenly between the two ramekins.

Place ramekins in an 8-inch pan and add about an inch of hot water. Bake, uncovered, for about 35 minutes or until set.

While the puddings are baking, prepare the Salted Maple-Caramel Sauce. Melt butter in heavy medium saucepan over medium heat. Add sugar. Whisk until sugar melts and mixture is thick and boiling. Slowly whisk in cream. Bring sauce to a boil, whisking often, though not constantly. Boil until sauce thickens enough to coat the back of a spoon. Remove from heat. Whisk in coarse salt and maple extract.

Just prior to serving, drizzle each pudding with the salted maple-caramel sauce.