Alright folks! Here we go now. Day #2, St. Patrick’s Day countdown. Today we have a traditional dish, Potato, Leek & Chicken Pie, but this has a bit of a modern twist thrown in with the substitution of phyllo pastry for traditional pie crust. Last St. Patrick’s Day I gave you a wonderful recipe for Chicken and Leek Pasties, which are still a favourite around here. This new recipe is quite similar to that one as far as the filling is concerned. There is tender chicken and delicious leeks. I told you leeks would be putting in an appearance in quite a few dishes this year. Speaking of leeks, yesterday, March 1st, was St. David’s Day. St. David is the Patron Saint of Wales and the leek was his personal symbol. Along with the Daffodil, it is one of the national emblems of the country and is worn in his honour on folks lapels on St. David’s Day. But enough of the leek talk for now, back to the Pie recipe at hand. This new fangled Potato, Leek & Chicken Pie recipe differs from the Pasties filling in that it throws in some potatoes and mushrooms for good measure! As far as I’m concerned you can’t go wrong by adding either one of those ingredients. 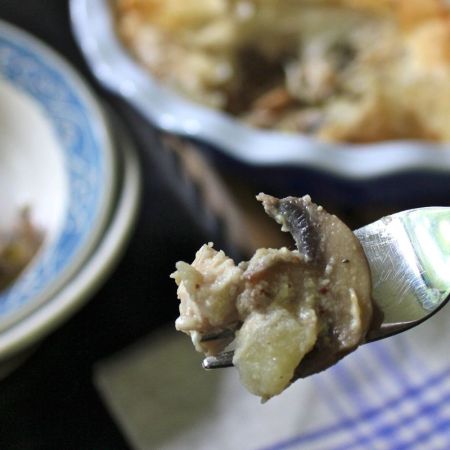 And the phyllo pastry is great in that it provides a wonderfully crispy topping. I know that in the past, I have complained quite a bit about working with phyllo pastry. It is quite fiddley, annoying work, but I freely admit, it is worth all the fuss in the end, because phyllo is so dang delicious. Crunchy, buttery perfection! With that sublime, savoury, creamy filling, you just can’t go wrong!

So I guess I would say this recipe is easy to make for the most part. I’m sure other folks have much more mad phyllo dough skills than I possess and would find making this pie a breeze! It really is quite tasty and hip to boot. You can’t beat that now!

Preheat the oven to 350°F. Cook the potatoes in a saucepan of boiling water for 5 minutes. Drain and set aside.

Melt half of the butter in a skillet and cook the chicken for 5 minutes, or until browned all over.

Add the leeks and mushrooms and cook for 3 minutes, stirring. Stir in the flour and cook for 1 minute, stirring continuously. Gradually stir in the milk and bring to a boil. Add the mustard, sage and potatoes, season to taste with salt and pepper and simmer for 10 minutes.

Meanwhile, melt the remaining butter in a small saucepan. Line a deep pie dish with half of the sheets of phyllo pastry. Spoon the chicken mixture into the dish and cover with a sheet of pastry. Brush the pastry with a little of the melted butter and lay another sheet on top. Brush this sheet with melted butter.

Cut the remaining phyllo pastry into strips and fold them onto the top of the pie to create a ruffled effect. Brush the strips with the remaining melted butter and cook in the preheated oven for 45 minutes or until golden brown and crisp. Serve hot.