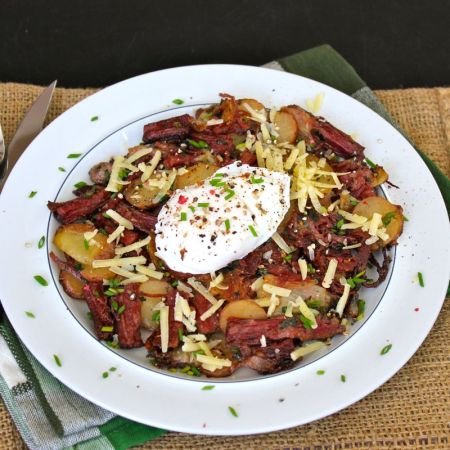 Corned Beef and cabbage! What would St. Patrick’s Day be without it? The quintessential Irish dish, or is it? Well, I’m sure all of my Irish friends (the ones that actually live in Ireland, not the Irish American ones to be specific) are saying…”What would it be without it? What would it be with it is a better question!” That’s right folks…Corned Beef and Cabbage is not considered “Irish” by the Irish themselves. They don’t really eat it there on St. Patrick’s Day or likely any other day of the year. “Hey….”I can just hear some of you saying…”I visited there last St. Patrick’s Day and I was served up a big old plate of the stuff”. I don’t doubt that you were. The Irish, being as accommodating as they are, made it up just because they knew hoards of Irish American tourists were going to turn up and be expecting it. It is not traditional for them whatsoever! But, that being said…it IS traditional St. Patrick’s Day fare for all the Irish Americans out there, who are the ones that really got that St. Patrick’s Day party going. And the recipe for today, Corned Beef Hash, doesn’t have so much to do with how to cook that big old hunk of corned beef and vegetables (hint….you boil the bejesus out of it….Just kidding 🙂 You simmer it all day, ever so gently… ), but what you do with the leftovers. I love recipes for leftovers. So much so that I’m giving you the one today and another one tomorrow. (bit of a spoiler, but it is for a corned beef appetizer, so stay tuned!). The husband swears that this Corned Beef Hash is fantastic. Indeed he preferred it to the original Corned Beef Feast we’d had the night before. 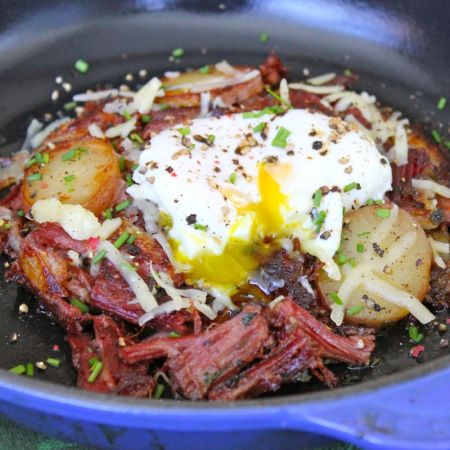 But I’m sure some of you folks are still reeling from me letting the old “Corned Beef isn’t really Irish” cat out of the bag. So let me explain a little bit. Corned Beef, as I’m sure ya’ll know, has nothing to do with corn. The “corn” part of the title refers to the fact that large grain rock salt (salt kind of the same size as a grain of corn) was traditionally used to cure it. Back in the day, before reliable refrigeration, this “corning” was done to preserve meat. That vibrant pink color that corned beef is sporting is due to the pink salt that was used to cure it. Now this isn’t the fancy pants pink Himalayan salt that you may have read about, nope this is salt with good old sodium nitrate mixed in, which has been dyed a bright pink so that it is easily distinguishable from regular salt. It is the same reason why hot dogs have that rosy pink hue. Saltpetre, or potassium nitrate has also been used to preserve meat since the Middle Ages. Interestingly enough, it is also one of the main ingredients in gun powder. Saltpetre inhibits the germination of C. botulinum endospores as well as softens tough meat. Seventeenth century Ireland was the largest supplier of corned beef  in the world. That was because beef was very plentiful in the country and the salt tax in Ireland was 1/ 10 of what is was in England which meant the Anglo-Irish could import high quality salt at a lower price, cure that plentiful beef that they had in abundance and ready it for export. Which they did so much so that Irish Corned Beef was regarded as the best on the market from the 1600’s until about 1825.  However, although the Irish were exporting a lot of beef, they were not eating it. The Irish traditionally ate pork and beef was too expensive. After the potato famine in the mid 1800’s, many Irish immigrated to the United States. Once they arrived, many settling in New York, and living next to the many other immigrants of that time, they found that pork was very expensive, but that beef , which had previously been unaffordable, was plentiful. Their fellow immigrant Jewish butcher neighbors often sold an inexpensive cut of cured or corned beef brisket, which had started out quite tough but had been transformed by the curing process into a tender flavourful cut of beef. The Irish, being very adaptable, substituted this Jewish Corned Beef for the more expensive joint of bacon in their familiar boiled cabbage and potato recipe, thereby transforming and reinterpreting  the dish.

So there you have it, not an Irish dish per se, but an exceedingly Irish American dish. I hope this recipe will inspire you to cast your eye not only to the big St. Patrick’s Day feast, but also to the days after. The leftovers days. St. Patrick’s Day is only four days away, so plan ahead! Buy that bigger cut of brisket and cook up a bit extra, so that you’ll have plenty of leftovers to work with. I promise you, you won’t regret it. This Corned Beef Hash is phenomenal. Just what the doctor called for to perk you up the day after the many St. Patrick’s Day parades, festivities and undoubtedly excessive green beer guzzling. 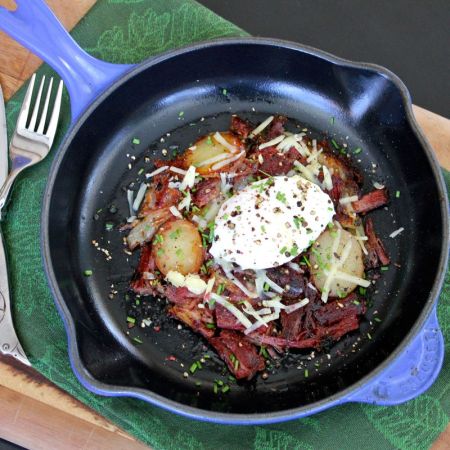 This recipe assumes that you’ve already made your St. Patrick’s Day Corned Beef Feast and have managed to set aside a few leftovers, namely 2 cups of shredded corned beef, 1 medium onion and one large russet potato. I had used baby red potatoes when I made my corned beef dinner, so I just used a big handful of those.

Preheat oven to 200° F. Thinly slice cooked onion and potato into 1/2″ pieces; toss in a large bowl with corned beef, 1/4 cup parsley, and 1 cup Irish Cheddar. Moisten with some reserved cooking liquid if mixture seems dry. If you don’t have cooking liquid, just use a splash or two of Guinness; season with salt and pepper.

Heat 2 tablespoons butter in medium nonstick skillet over medium heat. Add 1/2 of the corned beef mixture and press down to form a pancake. Cook undisturbed until the underside is golden brown and crisp, about 6 – 8 minutes. Set a plate over the pan and carefully invert the pancake onto it; then slide it back into the pan, uncooked side down. Press it back into pancake shape again and then once again…do not touch it! Let it cook for 6 – 8 minutes again. Then carefully transfer it to a baking sheet, tent with foil and pace in the oven to keep warm until you are ready to serve. Repeat with the remaining butter and corned beef mixture.

Meanwhile, bring 2″ of water to boil in a large saucepan or frying pan. Reduce the heat to a gentle simmer and add vinegar.

Crack an egg into a small bowl and once the water has reached a temperature of 190°F, slide the egg into the water. Repeat with the remaining eggs, waiting until the egg whites are opaque before adding the next egg. Poach for about 4 minutes to 4 1/2 minutes. Using a slotted spoon, transfer eggs to a paper towel. Trim away any whispy egg whites if you desire. Eggs can be poached 2 hours ahead of time; place in a bowl of ice water and chill. If you are planning on doing eggs ahead and will need to reheat, you may want to reduce initial cooking time to 3 – 3 1/2 minutes so that they are not overdone after reheating. Reheat in simmering water for 1 minute prior to serving.

Serve eggs over hash, seasoned with salt and pepper and topped with chives, more cheddar and more parsley.

Corned Beef Hash brought to you by: Runcible Eats (www.leaandjay.com)