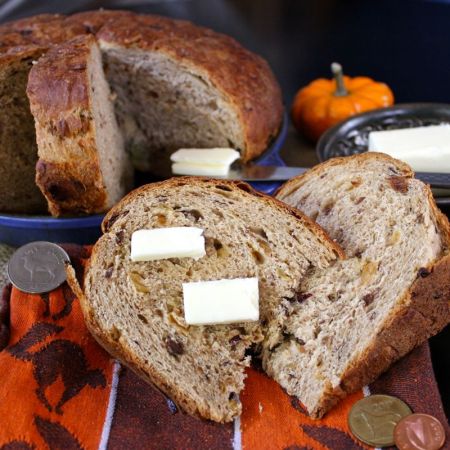 Here we are, March 9th and I’ve already shared 4 Irish-y recipes here in this lead up to St. Patrick’s Day. Today I’ve got a twofer for you. I’m actually going to remind you of two recipes I posted back in October for Barmbrack. Barmbrack is a traditional Halloween treat in Ireland, so I told you all about it back then. But it would certainly be very welcome on any St. Patrick’s Day table as well. Not to mention, I needed a bit of a breather before my blog-a-thon starts to pick up speed. Yup….starting tomorrow I am going to share one new recipe a day all the way to March 17th! A veritable blitz of dishes I tell you. But for now, back to that Barmbrack I just mentioned.

Barmbrack is also known as Báirín Breac in Irish. Breac means “speckled” which this bread definitely is, being shot through with a variety of fruit. Báirín can either be the word for “loaf” which would make sense since that would make its name be “speckled loaf” in English. However, I’ve also come across the theory that Barm is derived from the word “beorma”, which refers to a fermented liquor which would have been used back in the day to rise the cake. Barmbrack loaves were traditionally baked up on Halloween as part of an ancient fortune-telling ritual. Yup. Several different trinkets or charms (perhaps the origin of that “lucky charm” bit…) were wrapped in parchment paper and baked  into the bread. When the bread was sliced and handed out, your future was foretold by whatever bit you found in your portion. A wedding ring meant you’d be married within the year, a pea meant that you would not, a coin signified wealth, whereas a piece of rag meant a lean year, a thimble predicted a spinster and button meant bachelorhood was in your future. Back in October, when I first set out to make Barmbrack, I quickly discovered that there were two different types of the bread to be found, a yeasted version and a non-yeasted version which was more like a tea bread. I couldn’t decide which one to make, so I did a loaf of each. I found the yeasted version to be light, airy, slightly sweet and spicy (in a nutmeg/cinnamon/clove kind of way – not my usual set your tongue alight kind of way.) It was chock full of whiskey & tea soaked raisins, sultanas and cranberries. Lovely still warm from the oven, it was even better I think when toasted and slathered in butter!

The second Brack I made was a Tea Barmbrack, which is a rich, dense loaf similar to a fruitcake. But not one of those yucky things some great Aunt sends you at Christmas. No sir-ee, this crave worthy loaf will completely erase all of your pre-conceived fruitcake notions with just one delectable bite. This Tea Barmbrack is full of boozy soaked raisins, sultanas, currants and dates. And it has that Whiskey Honey Butter Glaze. Pure ambrosia I tell you! One taste and you will be hooked! 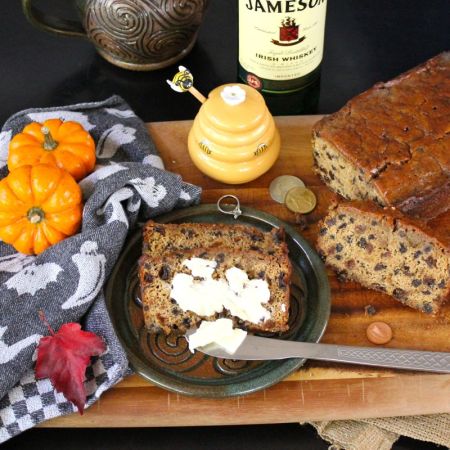 So which one should you choose? That’s a hard one. I thought they both were pretty scrumptious. The yeasted one takes a little longer to make when you factor in all of the rise times, but if you love yeast bread, that might be your winner. The Tea Barmbrack is a one bowl wonder and doesn’t require any rise times. Hmmm…decisions, decisions. Rest assured there is no wrong choice. They are both winners and will be a great complement to your St. Patrick’s Day table.

Get the Recipe for Barmbrack Bread (Yeasted Version) 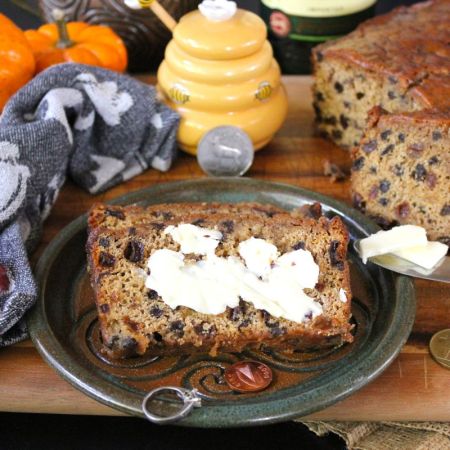