I actually did it! I managed to make Biscotti all on my own! And not any old Biscotti, this Cranberry, Pistachio and White Chocolate Biscotti rocks! It is far and away, the best Biscotti I have ever eaten! My friend John originally turned me on to Biscotti by bringing me Whole Food’s Cranberry Pistachio version, telling me “This stuff is fantastic! You should try it.” Well, truth be told, although I was thankful he was so thoughtful, I wasn’t thrilled with idea of the biscotti. Every Biscotti I had eaten up until that point had been very dry, like chewing sawdust, with very little flavour. Furthermore, it was often so hard that I just knew it had a high probability of cracking every tooth I had it my head! So, the Whole Food Biscotti got pushed aside for a few days. But John had been so enthusiastic about them, I decided to give them a try. Armed with a cup of coffee to lessen the likely hood of a sudden trip to the dentist, I tentatively dunked and then tasted. John was right! These Biscotti were fantastic! Fast forward to about a month ago, I happened to see Giada De Laurentis making Biscotti on the Food Network. She made it look very easy, so I gave it a whirl.

The only thing I changed in her recipe is that she dipped her Cranberry, Pistachio Biscotti in melted White Chocolate and then sprinkled them with red and green sanding sugar to give them a real Holiday feel. I decided to simply add some white chocolate chips to the mix and skip the dipping. I thought that the red cranberries and green pistachios give it all the Holiday cheer it needed. (and I might be a bit lazy…) The results? These Biscotti put the Whole Foods version to shame. They are full of flavour, you can really taste the cranberries, and have an awesome texture, crunchy yet still moist.

My husband happened to pop into the kitchen just after I had taken my first bite to find me literally dancing about. Being somewhat leery of Biscotti himself, for the same reasons I had been, he was a bit hesitant to try them. But watching my happy dance, he couldn’t resist and now is a Biscotti fan himself! He loved them. He loved them so much he is asking me to make an Apricot Dark Chocolate version which I am planning to do later this week. Even our dog loves them, so much he can recognize the sound of the Biscotti container opening and will immediately run to the kitchen. (Not that we spoil our dog by giving him people food…) So, I guess I’m saying, don’t put up with that brick bat hard, tasteless, cardboardy store-bought Biscotti any longer, make some for yourself and see how delicious it can truly be! 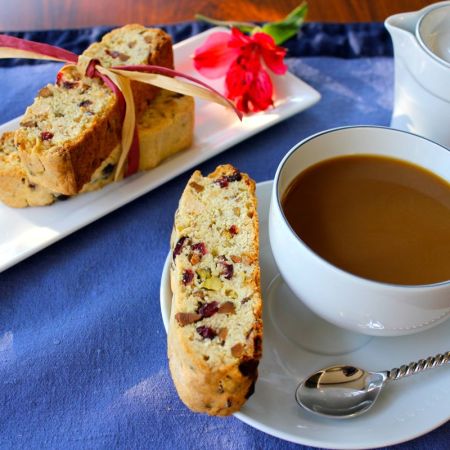 recipe from Giada De Laurentis via the Food Network

Preheat the oven to 350 degrees F.

Line a heavy large baking sheet with parchment paper. Whisk the flour and baking powder in a medium bowl to blend. Using an electric mixer, beat the sugar, butter, lemon zest, and salt in a large bowl to blend. Beat in the eggs 1 at a time. Add the flour mixture and beat just until blended. Stir in the pistachios, cranberries and white chocolate.

Form the dough into a 13-inch long, 3-inch wide log on the prepared baking sheet. Bake until light golden, about 40 minutes. Cool for 30 minutes.

Place the log on the cutting board. Using a sharp serrated knife, cut the log on a diagonal into 1/2 to 3/4-inch-thick slices. Arrange the biscotti, cut side down, on the baking sheet. Bake the biscotti until they are pale golden, about 15 minutes. Transfer the biscotti to a rack and cool completely.