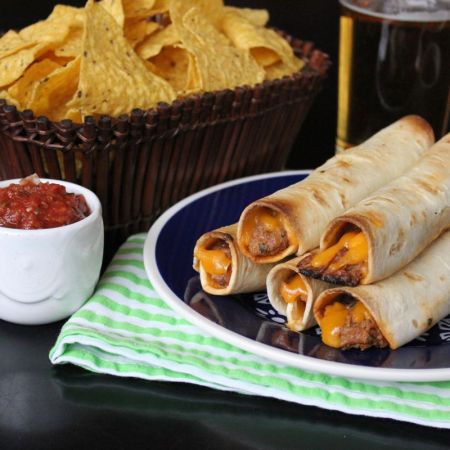 Here it is, May 3rd and Cinco de Mayo is nearly upon us! But there is still time to make these outstanding BBQ Pulled Pork Taquitos before the big day and I assure you, you will be glad that you did! If you’ll recall, just a few weeks ago I broke out my slow cooker and made some mouth-watering pork carnitas which I used for Carnitas Tacos. Quite unbelievably,  I actually had a bit of that pork leftover and that is what went into these Taquitos.

Now don’t get me wrong, I loved those tacos, but I can see firing up that crock pot again just to make these little devils. Not only are they absolutely dee-lish but they are also easy to prepare. No frying, these gems are baked. And where a lot of recipes I perused called for cream cheese, these little fellows are made with ranch dressing and BBQ sauce. Now you can pick whatever BBQ sauce happens to be your favourite. As you know, if you’ve been paying any mind to us around here, we like it pretty spicy, so I went with a Habañero Hot. But you can customize this recipe to your taste and do whatsoever you please, as far as the sauce goes anyway…sweet, mustardy, vinegary…you name it! I will say though if you are going to follow my lead, you might want to have a bunch of beer iced down and ready to go. (Actually, now that I think about it,  you should do that regardless of the sauce you pick 🙂

One thing you should keep in mind is that it does take a while for the slow cooker to work its magic on that pork shoulder, so plan ahead. But once that pork is pulled and ready to go, these Taquitos assemble quickly and easily. You can make up a big tray of them earlier in the day and then just pop them into the oven 30 minutes or so before party guests arrive. Not that you need to have a party to serve these. My husband is already making plans to have the next batch I make all to his self! In fact, I haven’t tried this, but I think you could substitute in some chicken (perhaps rotisserie chicken if you are pressed for time) for the pork and these would still taste superb. So there you have it. I’ve given you a few great Cinco de Mayo recipes now, Carnitas Tacos, Salsa, Guacamole and BBQ Pulled Pork Taquitos. With food mostly covered, you should be well on your way to planning a rocking celebration in just a couple of days. Don’t forget the drinks…oh, and a hot Mariachi Band. Let me know how it goes! 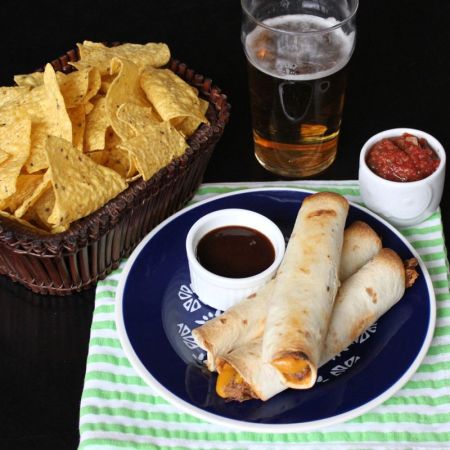 In a large bowl, stir together 1/4 cup of the ranch dressing, the barbecue sauce, paprika, chile powder, garlic powder, mustard powder, brown sugar, salt, red onion, scallions and cilantro. (If the mixture seems too dry, add the remaining ranch dressing.) Add the pork and cheese and stir until evenly distributed. Season the mixture to taste with salt and pepper.

Place 2 tortillas at a time on a microwave safe plate and cover with a damp paper towel. Microwave for 25 seconds, or until the tortillas are soft and pliable. Spoon 2-3 tablespoons of the filling onto the lower third of each tortilla, and roll tightly. Place seam side-down on the prepared baking sheet. Repeat with the remaining tortillas and filling.

Spray the tops of the taquitos with cooking spray and sprinkle with kosher salt. Bake for 15-20 minutes, or until the tortillas are crisp and golden. Serve with salsa and/or barbecue sauce.

I gotta tell ya’ll, we LOVE any sort of Mexican/Tex-Mex food around here. I’m always more than happy to try out any such recipe. And on Friday night, one of the bands my husband plays in usually arrives here to rehearse. (yup…we have a rehearsal space/recording studio in our basement.) Which is great because it gives me a captive audience to try out new recipes on. And they went absolutely wild for these Carnitas Tacos! What really made these tacos stand out from the run of the mill ground beef tacos was the delicious, spicy, melt-in-your-mouth-tender yet crispy at the edges pork. And the truly wonderful thing about these carnitas is that I was able to make the dish with very little fuss. No really, I kid you not and I’m not even exaggerating the least little bit! You see they are crock pot carnitas. I don’t know about you, but I seem to have some strange ideas about how one gets pulled pork. Perhaps it is a bit of the southerner in me, but I instantly think of a whole pig over a spit and some poor sweltering soul that is left to turn the crank on the spit for the days it takes it to cook. Of course, I fear that I’m going to be that poor soul, so I tend to shy away from any pulled pork recipe. But do you know what I’ve come to realize? You don’t need to man a spit. In fact, you can make some heavenly pulled pork in a crock pot. Go figure! So, this is what I did. I got up the day before folks were going to arrive and put a big old pork shoulder into my crock pot with all the appropriate spices, some lime juice, orange juice and beer and then just turned it on and let it do its thing for 8 hours. When it was all done, I removed the meat, shredded it and popped it into the fridge. The next evening, I got all my taco fixings ready to go, you know the grated cheese, shredded lettuce, salsa, guacamole, diced onions and tomatoes, fresh chopped cilantro, sour cream and tortillas both soft and crispy. Then, shortly before I was going to serve dinner, I put the shredded pork in the broiler to warm it up and get it a little crispy around the edges.

It was really easy and incredibly tasty! And the other amazing thing is that there were left-overs! On band rehearsal evenings I’m usually feeding six hungry musicians, so more often than not the only thing I bring back into the kitchen are dirty dishes. However, this time I knew I’d be able to get at least one more meal from these carnitas. Hmmm…there are so many possibilities, we could do more tacos, or a tamale pie or pulled pork sandwiches. You’ll have to check back to see what I actually came up with, but I’ll tell you it was just as good as these stop-you-in-your-tracks Carnitas Tacos and that is saying something! But don’t let folks in on the secret, let them imagine you out there toiling endlessly over that spit!

recipe from: Pinch of Yum

Taco Fixings: whatever your favourites are, but here are some suggestions

Place the pork shoulder in the slow cooker, fat side up. Roughly chop the garlic and place in the slow cooker (I actually kind of rubbed it onto the meat to get as much garlic flavor as possible, but you could just toss it in, too).

Remove pork from the slow cooker. Shred meat with two forks. Reserve the sauce separately. The meat should fall apart easily. At this point, you can either place the meat in the refrigerator if you are serving at a later date. Or if you are ready to serve it right then and there, preheat the broiler. Line a baking sheet with aluminum foil. Place the shredded meat on the cooking sheet and pour a few spoonfuls of sauce over the top. Broil for 5-10 minutes or until you get browned edges on the pork.Serve on tortillas with fresh cilantro, avocado, and all the fixins!