I know, I know. We’re getting close to the Christmas season and this Caramel Apple Pull-Apart Bread does have more of a Fall vibe to it, what with the apples and all. At least that is what you might think until you taste it. Then you will come to the realization that I did. This bread is so addictively delicious that it is appropriate, no…perhaps even required, any season of the year! Pull just one of the gooey, cinnamony, caramely, appley slices off  while it’s still warm from the oven and take a bite. You’ll see. It’s like one of those decadent cinnamon rolls, ‘cept better! And believe me, you won’t be able to stop with just one of the slices. No sir-ee. Before you know it, you’ll look down and find the loaf half gone and notice your britches seem to have suddenly shrunk as the top button pops off and shoots across the room. (I hear that fabric does tend to shrink when it gets colder.) 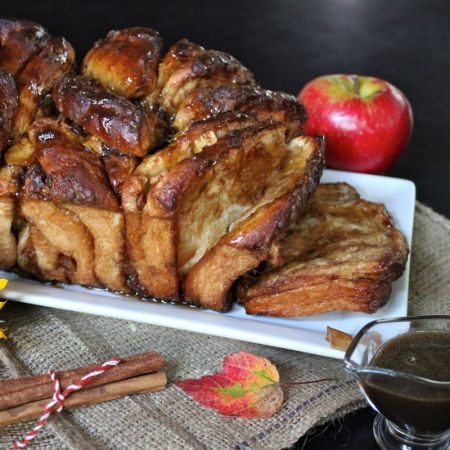 It looks as though this recipe might be hard to make, what with all the steps, but it really comes together very easily. You don’t even have to worry about how you throw the cut dough pieces into the pan either. The bread is supposed to have that jumbled, rustic appearance. Not to mention, the basic Pull-Apart Bread of this recipe can be customized as well. Theresa at Craving Chronicles made a Peach Cinnamon & Brown Butter version. While Tracey at Tracey’s Culinary Adventures baked up a Cinnamon Sugar loaf. Get creative and come up with your own version. But you’ve gotta make this bread. And soon! You won’t be sorry! 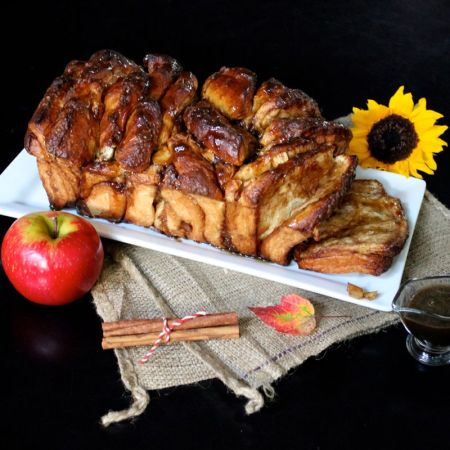 recipe from: Alaska from Scratch

For the Apple Filling:

For the Caramel Glaze:

To the bowl of a stand-mixer fitted with the dough hook attachment, combine warm water and yeast. Let sit for 5-8 minutes until foamy.

In a microwave-safe dish, heat milk and butter together until butter is just melted. Add vanilla to the mixture and set aside.

Add flour, sugar and salt on top of the yeast mixture in mixing bowl. Turn mixer on low and add eggs, one at a time, until combined. Slowly stream the milk/butter/vanilla mixture into the bowl until a soft dough forms. Add extra flour by the tablespoon until the dough pulls away from the sides of the bowl and forms a ball. Turn mixer up to medium and knead the dough for 3 minutes. Remove dough from mixer bowl and place in a greased bowl. Cover and let dough rise in a warm place for 90 minutes, or until doubled in size.

Meanwhile, in a small bowl mix together the brown sugar, cinnamon and salt. Set aside. Peel, core and dice the apple. Melt butter just before the dough has completed its rise. Grease a standard 9×5″ loaf pan.

Once risen, punch down dough, cover, and let rest for 5 minutes. Roll dough out into a large rectangle (roughly 12×24 inches). Dough will be fairly thin. Brush melted butter over top of dough. Sprinkle evenly with brown sugar/cinnamon mixture. Using a pizza cutter, cut into 6 equal strips. Sprinkle about 1/6 of diced apples over one strip of dough, then stack another strip of dough on top. Repeat adding the apple mixture and stacking dough strips with remaining dough. Cut stacked strips into 6 equal stacks of squares. Stuff stacked squares vertically into prepared 9×5 loaf pan. Cover with a kitchen towel and let rise 30-45 minutes in a warm place.

Preheat over to 350ºF. Bake about 35-45 minutes, or until no longer doughy in the center (bread should register 190ºF on an instant thermometer in the center when done). If bread starts to get too brown before it’s ready, cover loosely with foil and continue baking.

Cool on a wire rack for 10 minutes. Meanwhile, prepare the glaze by adding the butter, brown sugar and milk to a saucepan over medium heat. Bring to a boil and cook for 1 minute.

Turn loaf out onto a rack with parchment paper under it. Drizzle load with the warm caramel glaze.