Lemon Curd Bread Pudding with Blackberry Glaze for my Valentine

I know chocolate gets all the prominent billing with almost everyone for Valentine’s Day, but not with my sweetie. He likes chocolate o.k., I mean who doesn’t,  but given the choice of delectable treats, he will go for the offering with fruit in it 9 times out of 10. So when searching for a Valentine treat that I could whip up for him, I kept his love of bread pudding as well as lemon bars in mind. I had seen a recipe for Meyer Lemon Marmalade Bread Pudding that I was dying to make at Spoon with Me a while ago. If you haven’t taken a peek at her site, you are truly missing out. Her recipes are fantastic and her photography is stunning. She had made the Meyer Lemon Marmalade that she used in this dish herself and I didn’t see any such thing available in my local grocery stores. Nor was I industrious enough to make said marmalade. However, my Valentine loves lemon curd, which we have plenty of in the house, so I adapted the recipe. I figured the curd wouldn’t make a very pretty glaze on top of the pudding, but another favourite of my darlin’s is blackberry preserves. Voila! He was very pleased with the results! 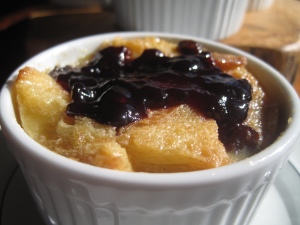 The fun thing about this recipe is that it is very customizable. You can replace the marmalade with whatever fruit strikes your fancy, or mix it up like I did with one flavour of pudding and a different glaze. Or you can just add different toppings to the pudding. I must admit that I really do love chocolate and was having a complete chocolate fit watching the flood of great chocolate Valentine’s recipes go by, so I might have made a couple of these little ramekins of pudding with a chocolate chip topping. 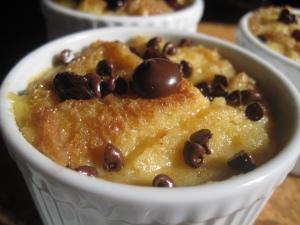 Excellent as well! And everyone is happy! (Just between us, I am still hoping for a Valentine’s Day cupcake, but my Valentine knows me well, so I don’t think I will be disappointed.) Veuve Clicquot goes well with both bread pudding and cupcakes, so we’ll be set. 🙂 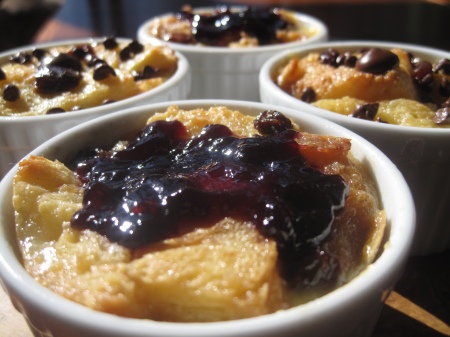 Remove the crust from the Challah bread. Cut bread into 1 inch cubes and toast for 10 minutes. Allow to cool and then place in large bowl.

Place the raisins in a medium bowl and cover with boiling water. Let sit until plump and moist, about 15 minutes or so. Drain well and sprinkle raisins over bread crumbs.

Heat the lemon curd and butter in a small saucepan until melted and combined. Remove from heat and pour over bread cubes. Gently toss.

In a medium bowl, whisk together the eggs, egg yolks, sugar, cinnamon and vanilla extract.

Heat cream in medium saucepan over medium heat until it simmers.

Slowly add the heated cream to the egg mixture, whisking constantly until combined. If you add the cream too quickly it will cause the eggs to cook!

Pour the custard over the bread cubes and gently toss until coated. Allow bread to soak-up custard for 30 minutes. Fill the buttered ramekins with the bread-custard mixture, making sure to equally distribute the raisins which may have sunk to the bottom of the bowl. Bake* for 25 minutes, or until tops of the puddings began to brown. Spoon 1 teaspoon of the blackberry glaze over the top of each pudding. Bake for 5 more minutes.

*Puddings can be refrigerated overnight prior to baking. When ready to bake, remove ramekins from refrigerator and allow them to come to room temperature before placing them in the oven. 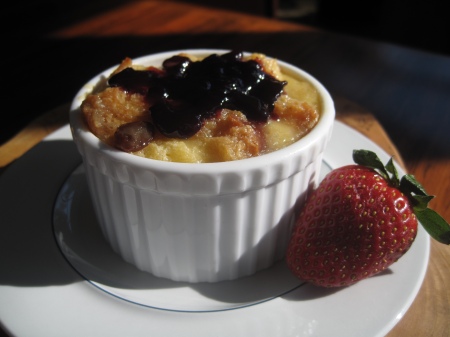