My Granddad, “Pop-pop Roy”, as I called him when I was younger, loved these Apple Dumplings. Grandda wasn’t a big sweets eater. Other than those Apple Dumplings, my only memory of him indulging in any sugary treat was Ginger Snaps. He did love his Ginger Snaps. I have fond memories of sitting on his lap when I was about 4 or 5, watching “Hogan’s Heros” and sharing those cookies. He would put each cookie on his knee, put his thumb right in the center and press down. The cookie would neatly break into 4 equal pieces and he’d give two to me and take two for his own. 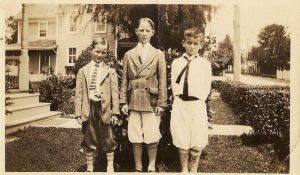 Couldn't resist another of these pics. Granddad is the one in the middle.

Granddad passed away at the age of 91 in 2008. We still make his Apple Dumplings on Thanksgiving.

As it turns out, my husband also loves Apple Dumplings. When we were first dating, we went to my parents house for Thanksgiving Dinner. Like Grandda, Jay chose the Apple Dumpling, topped with a bit of vanilla ice cream (of course!) for his dessert. We had been doing the South Beach Diet pretty intensely in the months leading up to this and had decided to totally ignore it for the day and eat whatever we wanted. Well, the incredibly tasty and sweet Apple Dumpling was quite a shock to his previously sugar starved system and he went into a sort of sugar coma. Unfortunately it was while he was driving us home! You know how you sometimes say that a particular treat is “to die for”? Yeah, well we almost did! I guess it wasn’t really that bad. It just involved him attempting to continue straight on as the road turned. I can just see us trying to explain it to the law…”No really Officer, I haven’t been drinking. It was Pop-pop Roy’s Apple Dumpling!” It all ended just fine. No harm done. I was not in a sugar coma and after the swerving, believe me, I was wide awake. I switched places with him and drove us the rest of the way home, while he slept it off. The experience did not scare Jay away from Apple Dumplings at all, though he definitely respects their power now. And he made sure I learned that recipe from my Mom. Indeed I did and I just made up a batch.

Hot out of the oven!

They taste fantastic! I used my beloved HoneyCrisp apples for these, and yes, I use a whole apple rubbed in cinnamon, sugar and nutmeg for each dumpling. Then I top each sugar and spiced apple with a knob of butter and cover them with a short crust. Once they are completely enrobed in that buttery pastry, I drizzle a decadent gooey cinnamon syrup over them and pop them in the oven to bake. The house smells amazing!

The Apple Dumplings are delicious! And they remind me of my Granddad. Make some for your family this Fall;  they will absolutely swoon. Just make sure no one has to drive that evening!

Recipe from: my Mum!

Add sugar, water, cinnamon and nutmeg to saucepan. Cook on medium heat until sugar melts and mixture thickens enough to coat the back of a spoon. Remove from heat and add butter. Stir until incorporated.

Pare and core apples. Set aside.

Place flour, salt and baking powder in food processor. Pulse just to combine. Cut chilled butter into 1″ cubes. Add to flour mixture and pulse until mixture resembles coarse crumbs. Add milk all at once and pulse until dough forms.

Arrange an apple on each square. Sprinkle generously with sugar, cinnamon and nutmeg. Dot with butter.

Fold pastry around apple until it is entirely covered. Place Dumplings 1 inch apart in greased  9×13″ baking pan. Pour the prepared syrup over the dumplings.

Bake for 45 minutes or until pastry is browned and apple is softened. You can check the apple texture by poking it with a wooden skewer or knife. If pastry is getting to brown, but apples aren’t yet soft enough, cover with foil.

Enjoy! but remember – friends don’t let friends drive under the influence of these dumplings!