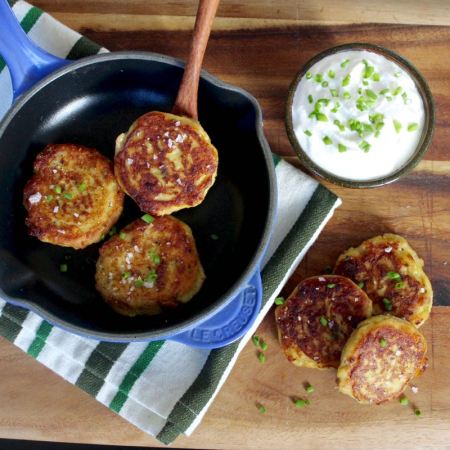 O.k…So you know that Colcannon I told you about yesterday? It is pretty ahhhh..mazing all on its own right? Well guess what? I don’t know if you will actually have any leftovers when you make up a big old batch of Colcannon…but if you do…you can make Colcannon Cheddar Skillet Cakes the next morning!

Squeeeeee! I love leftover recipes! And boy oh boy is this a fantastic one! You take that mouthwateringly delicious Colcannon and stir in some lovely Irish Cheddar, an egg and a bit of flour. Then you simply drop it onto a hot skillet and fry it up. Good Lord above!!! These little Colcannon Skillet Cakes are crisp and crunchy on the outside and filled with all the warm, gooey, cheesey Colcannon goodness on the inside. 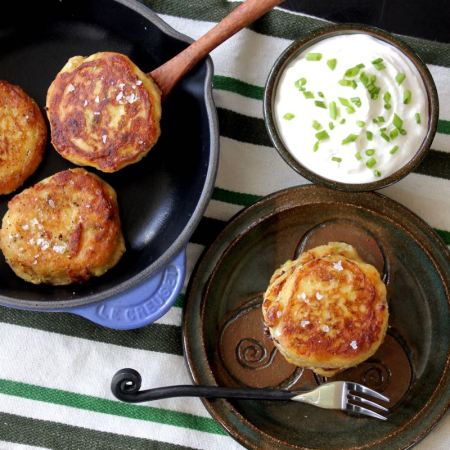 You might just have to  double your Colcannon recipe just to make sure that you do have leftovers so that you can make these Skillet Cakes. And they’re not only great for breakfast. We’ve had them as a side dish for dinner as well. So delicious! I wouldn’t have thought you could improve on Colcannon, but here we have. Comfort food nirvana has been achieved!

Make a well in the center of the Colcannon and add beaten egg. Mix until combined.

Heat a thin layer of oil (I used bacon grease, though any vegetable oil or even butter will work just fine) over medium heat in a cast iron skillet. Drop large cookie scoops full of Colcannon mixture into the pan. You can actually make any size Colcannon cakes that your heart desires. However, I have found that smaller cakes give you more of the crisp factor than larger cakes. But proceed as you wish.

Allow cakes to cook undisturbed until the underside is golden brown. Flip the cakes and continue to cook until the second side is browned.

Remove cakes to a paper towel lined dish covered with foil until ready to serve. Serve warm with sour cream and chives if you desire.

This entry was posted on Sunday, March 13th, 2016 at 10:05 am and is filed under Breakfast, brunch, Holidays, Recipes, Side Dishes, St. Patrick's Day. You can follow any responses to this entry through the RSS 2.0 feed. You can leave a response, or trackback from your own site.