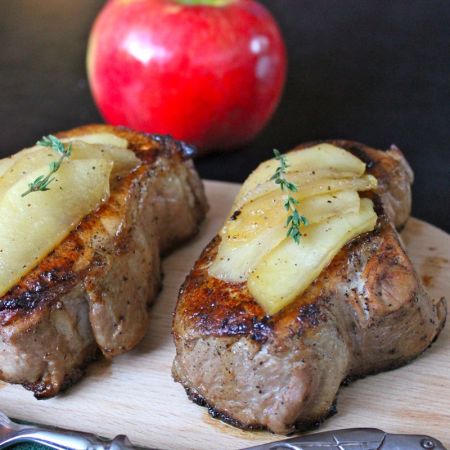 You might be wondering what makes Cider-Brined Pork Chops with Sautéed Apples a particularly Irish recipe. I suppose I would be hard-pressed to show an Irish provenance for it were someone to require it. What I can say is that all of the ingredients used in this dish are abundant in Ireland and have been part of the cuisine there for thousands of years. Indeed there is archaeological evidence which indicates that apples have been grown there for over 5000 years and cider making stretches back at least 2000 years if not more. We also know that wild boar was being consumed in Ireland as far back as 7000 BC. So although I didn’t actually find this recipe in an Irish cookbook, I know it is the type of dish, made with fresh locally sourced ingredients, that you would be likely to encounter when visiting the country. And I’ve got to tell you, it is absolutely delicious!

You see these pork chops have been brined overnight in cider based brine. A brine is similar to a marinade, but is able to really permeate the meat, and infuse it with flavour. It also works to tenderize the meat. And these pork chops would nearly melt in your mouth! 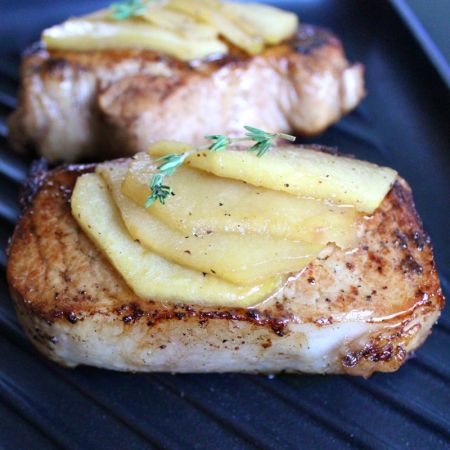 The classic combination of pork and apples also delivers that savory sweet sensation that I love. This dish would be very welcome in Fall when apples are in season but would also make a very nice St. Patrick’s Day offering. Now that I’ve made it once, I get the feeling that the husband will do his best to keep it in frequent rotation.

recipe from: The Corner Kitchen

For the brine and pork:

For the pan sauce:

In a medium bowl whisk together the apple cider, salt and brown sugar. Continue mixing until the salt and sugar are completely dissolved. Pour the brine in a large resealable plastic bag, along with the pork chops. Seal and refrigerate for at least 4 hours, though preferably overnight.

Melt the butter in a sauce pan over medium heat. Add the apple and brown sugar and stir to coat. Cook until the apples begin to soften, stirring occasionally, about 5 minutes. Pour in the wine and cook until mostly reduced. Stir in the apple cider, stock, thyme and a pinch of salt and pepper. Cook until the apples are very soft and most of the liquid has been absorbed. Set aside.

For the Pork Chops and pan sauce:

Remove the pork chops from the brine. Discard the liquid. Pat the meat dry and season both sides with salt and pepper. Heat 1 tablespoon of olive oil in a large cast iron, or oven safe skillet, over medium high heat. When the oil is very hot (you’ll notice ripples in the oil), but not yet smoking. Add the pork chops to the pan. Cook until there is a good sear and the meat is browned, 3 -5 minutes. Use tongs to flip the meat and cook for another 3 -5 minutes to sear the other side.

Transfer the pan to the oven and cook for 10 – 15 minutes, depending on the thickness of the pork chops. The most accurate measure  of doneness is to test the temperature of the meat, which should be a 145°F. When the meat is completely cooked remove the pan from the oven and transfer the pork chops to a plate.

Add 1/4 cup apple cider and 3/4 cup of chicken stock to the same pan you used to cook the pork, and cook over high heat, scraping the bottom of the pan. Bring the liquid to a boil and cook until it’s reduced by at least half. Taste and season with additional salt and pepper, if necessary.

To serve, divide the pork chops between plates, top with apples and spoon the pan sauce over the meat.

Cider-Brined Pork Chops with Sauteed Apples brought to you by: Runcible Eats (www.leaandjay.com)

This entry was posted on Thursday, March 5th, 2015 at 7:45 am and is filed under dinner, Holidays, Recipes, St. Patrick's Day. You can follow any responses to this entry through the RSS 2.0 feed. You can leave a response, or trackback from your own site.