Guláš, or goulash, a soup or stew of meat and vegetables seasoned with paprika may have Hungarian origins, but it is also quintessentially Czech. Every pub or restaurant that you go to there has their own unique version. Often it is served with Knedlicky (bread dumplings), but I’ve also seen it in a bread bowl or simply with potatoes. I can tell you this first hand because I was lucky enough to actually visit Prague back in September! In my last blog I mentioned that I had met my husband in Berlin after he finished with a work conference there. Well once we met up, we jumped on a train and high-tailed it to Prague! Now Berlin was very nice. I would definitely visit again given the chance, but Prague….well …what can I say…I am completely smitten! It was just stunningly beautiful! I really fell in love with it! 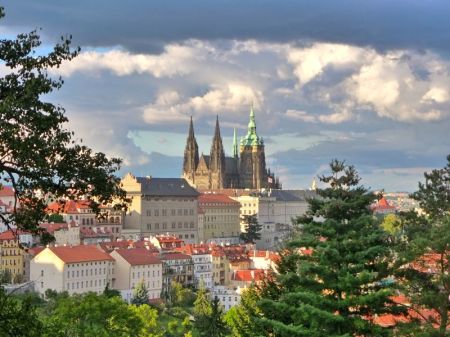 And as much as I liked our hotel in Berlin, Casa Camper, I completely adored The Golden Well (U Zlaté Studně), the boutique hotel where we stayed in Prague. I think it may indeed be my all time favourite hotel. The hotel is ideally located at the end of a quiet, cobbled, pedestrian street, right up against the walls of Prague Castle in the historic Malá Strana (Little Quarter) district.

Every single room in the hotel seemed to offer gorgeous vistas over the city.

Centrally located, it was only a short walk to get to Charles Bridge, St. Nicholas Cathedral, Old Town Square and the Jewish Quarter, yet so removed from the hustle and bustle of some areas of the city, it was a tranquil and peaceful oasis. The hotel and its exceptional staff truly exceeded our expectations. Our room was very luxurious and large. There was a bottle of wine waiting for us when we arrived,

as well as nightly bedside turn-down treats on the bedside table and a pillow menu. Yup…you heard me right. Pillow menu! You could choose a different style pillow, or two every night…”tonight I think I will go will the wool, lavender scented pillow” Yay! And the staff could not have been more friendly and attentive. As soon as we checked in we were offered a drink and snacks while a hotel representative went over a map of the city with us, advising us on possible destinations. Each afternoon wine and nibbles were served in the lounge. The breakfasts were out of this world. Not only were they served on a terrace which provided breathtaking views over the city, but they were so delicious and plentiful. I must admit this is the first time I have been exposed to the concept of the “breakfast dessert”. Just sounds great huh? Well let me explain. We were served a full cooked breakfast, you know, eggs, sausages, hash browns along with the well stocked breakfast buffet items. When we finished, our server asked if we were now ready for our “breakfast dessert” which would consist of pancakes or french toast! As much as we adored the idea, we were not able to take her up on it but it is good to keep in mind for the future! I just can not praise this hotel enough, and even if I didn’t care for Prague at all, which I assure you is not the case, I would be tempted return to the Golden Well as a destination all in itself! Over our four days in the city, we spent quite a lot of time at the Prague Castle Complex, thoroughly explored St. Vitus Cathedral,

climbed to the top of the bell tower for fantastic views over the city, 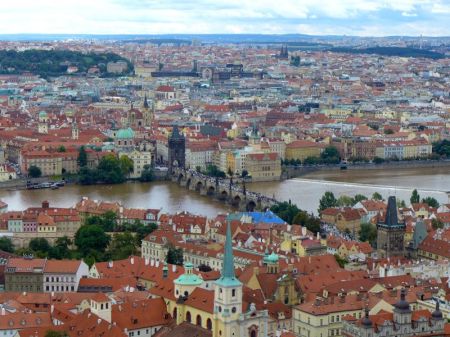 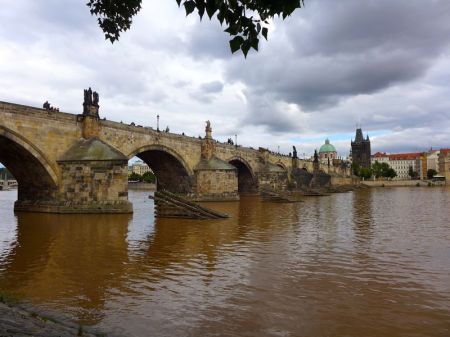 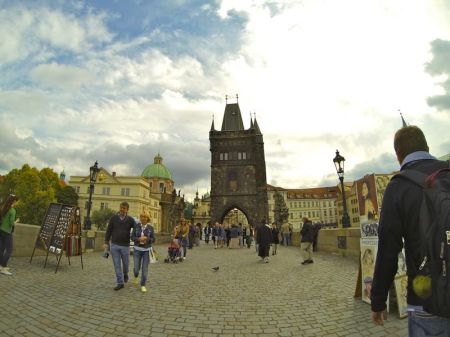 Commissioned by Emperor Charles VI in1357 and lined with statues of the Saints, it spans the Vlatava River connecting Prague Castle and Old Town.

The astronomical clock was built in 1490. 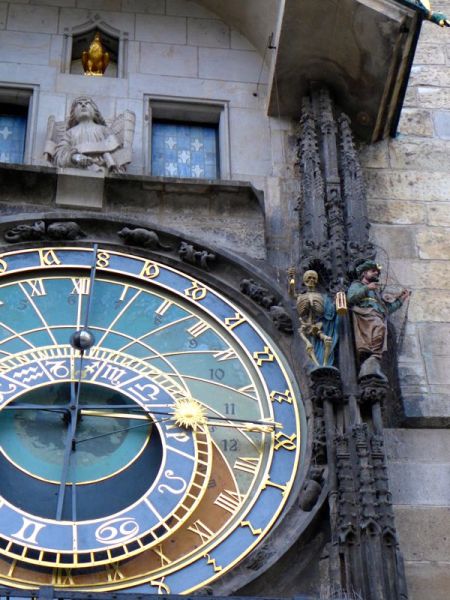 On its hourly chiming there is a procession of the 12 apostles, Death rings a bell and inverts his hourglass.

and climbed Old Town Hall tower to take in the view as well (can’t get enough of those stairs!), 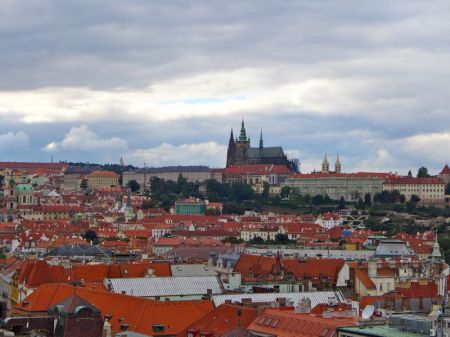 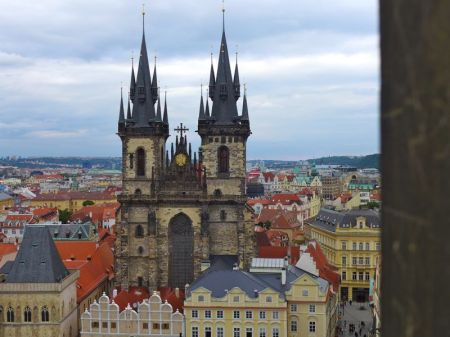 Church of Our Lady Before Tyn. Final resting place of Tycho Brahe.

The Old Jewish Cemetery was in use from early 15th Century up until 1787. It was the only place in which Prague’s Jewish citizens could be buried.

When they ran out of land they began to layer graves on top of one another. There are approximately 12 layers of graves, 12,000 tombstones and up to 100,000 burials.

climbed to the top of Petřín Hill

and hung out with some monastic brewers at the Strahov Monastery Brewery. 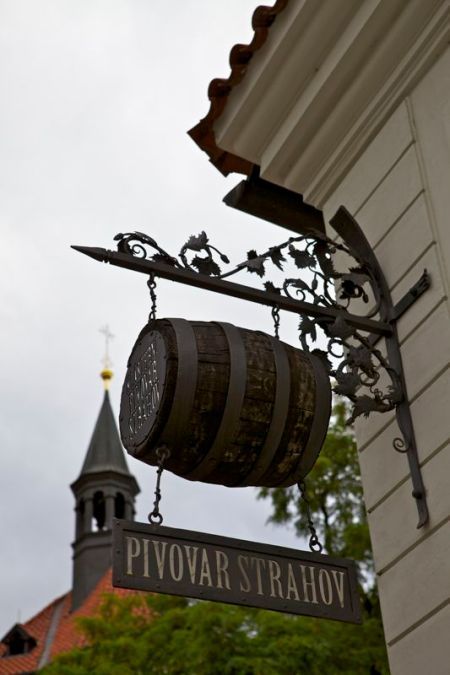 Whew! What a fantastic time! Needless to say, we worked up quite an appetite! And, to our delight,  pretty much every restaurant or pub we visited in that magical city had guláš on the menu. We tried out our fair share of them and enjoyed them all. Apparently Czech Guláš  is slightly different from the guláš offered in other countries in that it is a mostly beef based, thick stew served with bread dumplings and often garnished with fresh raw onions. I couldn’t wait to get back to my humble kitchen and try to figure out a good recipe. The bread dumplings were new to me, being more familiar with our big southern fluffy chicken and dumpling style dumplings. I went ahead and gave you a recipe for these Knedlicky and feel it was very similar to the dumplings we ate in Prague.

Definitely a new dumpling concept for me and I had a great time trying it out. I did seem so odd though, making a yeast bread dough and also adding bits of stale bread to the mix and then boiling it…who thought that up?! But they are just perfect for mopping up all that lovely guláš sauce. The morning after our guláš feast, we even fried a bunch of bread dumplings up in butter with our scrambled eggs and sausage and they were really tasty! We were very pleased with this version of Czech Guláš.

Quite fortuitously I made a huge pot of it right before our last big snow storm and it went a long way towards keeping the chill away on those frigid nights . Not to mention, its very presence couldn’t help but to  call to mind the heart warming memories from our Prague holiday. I can not wait to go back!

In a 12″ skillet, heat 1 tablespoon of the olive oil over medium-high. Working in batches, add beef which has been seasoned with salt and pepper to the pan and brown on all sides. Remove to platter and set aside.

Cover slow cooker and cook on high for 6 hours.

About 30 minutes prior to serving, whisk cornmeal with water until smooth. Stir mixture into Guláš to thicken.

Serve with 3-4 Knedlicky per helping. (recipe below) Or alternatively, serve in bread bowls.

Place milk in saucepan and warm to lukewarm (95° F). Pour 1/2 cup of warmed milk into bowl of stand mixer. Add 1/2 teaspoon of sugar. Stir to dissolve. Sprinkle yeast over the top. Let sit for 5 minutes or so until foamy.

Add the egg yolk and remainder of yeast and stir on low speed with the paddle attachment. Begin adding the flour, about 1 cup at a time. Add the cubed bread. If mixture seems too dry, add a bit more milk. Switch to the dough hook and knead for about 8 minutes. The dough should be elastic.

Dust work surface with flour and divide dough into 4 equal peices. Shape each into oblong rolls. Place rolls on parchment lined baking sheet and cover with plastic wrap. Let rise for about 1 hour or until approximately doubled in size.

When dough is ready, prepare a large pot of salted, boiling water. Carefully slide dumpling rolls, two at a time, into boiling water. Cover pot and reduce to simmer. Cook for 20 – 30 minutes, turning rolls several times so that they will cook evenly.

Remove from boiling water and place on cutting board. Cut dumplings into 1/4″ slices using string and serve immeadiately with Guláš. (if you want “neater” edges to your dumplings, use biscuit cutter )

Wrap any left over dumplings in plastic wrap and store in refrigerator. To reheat the dumplings, place in steamer basket and steam for about 8 minutes.

This entry was posted on Friday, February 21st, 2014 at 9:28 am and is filed under dinner, Prague, Recipes, soup, Travel. You can follow any responses to this entry through the RSS 2.0 feed. You can leave a response, or trackback from your own site.