So I know veggies are great, delicious and nutritious. And we were really into gobbling them up this summer. In fact, I have a few more recipes in which those great summer vegetables play a starring role. However, I’m thinking it might be time to take a break from the veggies and talk a little dessert. Like take a peek at these wonderful Banana Pudding Parfaits. Yummy! Rich and creamy, they were really quite decadent. And folks, the pudding part of this recipe is not from a box. That’s right! It is homemade pudding, layered with buttery Scottish shortbread cookies or good old-fashioned vanilla wafers, fresh bananas and topped with just a sprinkling of mini chocolate chips, all bottled up in an adorable little mason jar.

That made these desserts very portable. I just took care not to over fill them when assembling the parfaits, leaving just enough room to screw on the tops. Then I was able to transport them to the picnic in a cooler with no problems whatsoever. Not to mention, the mason jars just look very rustic and down home, even if your parfaits don’t need to travel.

I had never attempted making pudding from scratch, always reaching for that quick and easy box mix before. I will admit, homemade pudding does take a bit longer, but it is oh so worth it! You will most definitely taste a difference. The homemade sweetened whipped cream lightens the pudding up. I used both traditional Nilla Wafers as well as Shortbread cookies, making half the jars with one type of cookie and half with the other. Both were delicious and it was fun having the choice. I bet chocolate covered graham crackers would be great in these as well…or maybe some of those Pepperidge Farms Milanos…The possibilities are endless! But let me tell you, folks went wild for these, just as they were. Bet you will too! 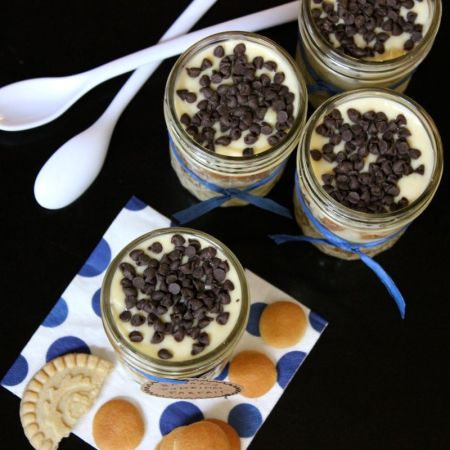 recipe from: Once Upon a Chef

For the Sweetened Whipped Cream

In a medium saucepan, stir together the sugar, cornstarch, salt and yolks. Whisk in the milk and bring to simmer, stirring frequently, over medium heat (it will take 5-8 minutes). When the mixture starts to bubble, turn the heat down to low and continue cooking, whisking constantly, for 1-2 minutes until the mixture thickens. Remove the pan from the heat and immediately whisk in the butter, vanilla and rum. Transfer the mixture to a bowl and place a piece of saran wrap directly over the pudding to prevent a film from forming. Chill in the refrigerator until cool, a few hours. (To hurry it up, you can place the bowl in an ice bath and whisk occasionally until cold.)

Once the pudding is cold, place the heavy cream in a medium mixing bowl. Using an electric mixer, whip on medium-low speed until the whisk or beaters begin to leave tracks in the cream. Add the Confectioners’ sugar and whip until the cream holds medium, silky peaks. Go slowly towards the end; if it gets grainy or curdled, you’ve gone too far. Use a rubber spatula to fold the whipped cream into the cold pudding.

Spoon a large dollop of the pudding mixture into the bottom of each parfait glass or 1/2 pint mason jar, as I’ve used. Top with one layer of cookie pieces and one layer of sliced bananas. Repeat once and top with a final layer of pudding. Top with mini chocolate chips. Refrigerate until ready to serve.

*Do not slice the bananas until you are ready to assemble the parfaits. Parfaits are best when made 3-4 hours ahead of time.

This entry was posted on Friday, October 11th, 2013 at 7:28 am and is filed under desserts, Recipes. You can follow any responses to this entry through the RSS 2.0 feed. You can leave a response, or trackback from your own site.