So while we’re on the subject of traditional Irish dishes for St. Patrick’s Day, I would be remiss if I didn’t mention Dublin Coddle. Dublin Coddle is a stew consisting of Irish Sausages, potatoes, onions and Irish Bacon. Oh, save us! Now that is my kind of stew! It has been enjoyed in Ireland since the seventeenth century and likely before. It was a favourite of the likes of Jonathan Swift, Seán O’Casey and James Joyce. How is that for an Irish pedigree for you?! The name Coddle, likely comes from the verb “caudle” which means to cook food in water below boiling. Now that below boiling is important, this stew is meant to be simmered or braised in a slow oven or stove-top. Or even in a slow cooker set on low for 4-6 hours. You can’t rush it. Remember, according to those old Irish wives telling tales, “a stew boiled is a stew spoiled“. You must be patient. It is said that some of the popularity of this stew was due to the fact that a wife could leave it simmering on the stove for hours and it would still be delicious when her man finally arrived home from the pub, long after she’d gone to bed! 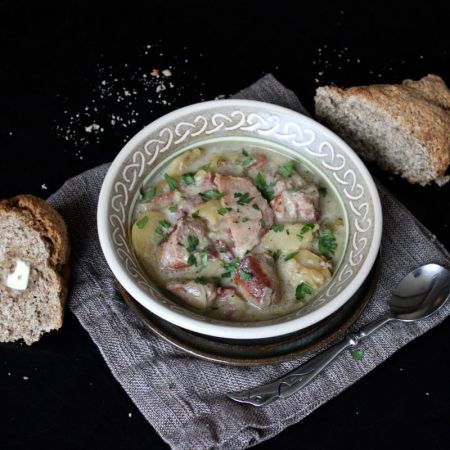 If you had not noticed, this stew does not have a heck of a lot of ingredients to it. Sausages, bacon, potatoes, and onions. It’s very simple. But that means it is highly dependent on the quality of the few ingredients involved. You want to source out the best you can find. Now in the States, I was a bit challenged sourcing out Irish style sausages and bacon. But it can be done. I found my Irish Sausages at the Falls Church Farmers Market at Stachowski Brand Charcuterie. They also have a storefront in Georgetown, Washington DC. They did say that these sausages were “English Bangers”, but that is much closer to the style of sausages found in Ireland than the usual  U.S. breakfast sausage. (You could use a regular breakfast sausage link if pressed, but I was trying to go for as close to authentic as I could get.) As far as the bacon goes, “English Rashers” is most likely as close as you will find. Irish bacon is quite different from what we call bacon in the states. Their bacon is taken from back loin, rather than the pork belly from which ours is cut. If you can’t find rashers, go with Canadian Bacon. I was able to find “English Rashers” at the Organic Butcher of McLean. They were absolutely outstanding! Besides salt, pepper and parsley, there are not a lot of spices in Dublin Coddle. I did decide to add some garlic, which I will justify by saying it is not unlikely that garlic would have been available and used in the good old days. I also added a couple of sprigs of thyme to my Coddle, pretty much justifying its presence along the same lines as the garlic. Indeed I will even go a bit further and give you an old Irish folktale about thyme. It is said that keeping a sprig of thyme in your pocket will not only protect you from fairy mischief, but will enable you to see them clearly when passing by a fairy mound. Very useful info I would say! Now I suppose I should take a moment to tell you what is not  to be found in Dublin Coddle….According to my friend Theresa, who lives in Ireland, there are no carrots to be found in Coddle. This is apparently a source of great controversy when one discusses Coddle in Ireland. Theresa’s family clearly comes down on the anti-carrot front and that is good enough for me. No Carrots! Don’t even think about it! (I’m sure I will be getting barraged with e-mails from great old established Dublin families, regaling me with tales of carrot inclusion as you read this… Oh well, I’m sticking to my guns! No carrots I say again!)

As far as preparation goes, it is traditional to throw all of the ingredients thus mentioned into a pot to simmer away for hours. There is no browning of anything. However, I thought a little browning was in order. I had read that this dish, although incredibly tasty, was not particularly photogenic. I thought a little browning might go a long way there. Turns out, I’m not so sure it made a difference with the photos, though I think it was beneficial to texture and am happy to recommend it. My husband had never tasted Dublin Coddle before and was definitely intrigued as he watched me run hither and thither to gather all of the “required” ingredients. He was not disappointed when presented with a big bowl of Dublin Coddle with a side of Brown Bread to soak up the sauce. Coddle proves “Looks aren’t everything”. It is warm, hearty and delicious, a veritable “hug in a bowl”. Irish comfort food at its best!

Place a large dutch oven over low heat. Layer 1/2 of the onion/garlic mixture in the bottom of the pan. Sprinkle with salt and pepper. Add 1/2 of the sliced potatoes.

Roughly chop the bacon and add to the pan over the potatoes.

Cut each sausage link in half or into thirds (your preference) and add it to the pan over the bacon. Cover sausage with sprinkling of fresh thyme leaves.

Top with the remaining onions and potatoes. Sprinkle with salt and pepper. Pour 2 cups of ham broth over layers.

Cover dutch oven and leave simmering on stove for 1 1/2 hours over low heat. About 30 minutes prior to serving, stir in 1/4 cup of cream or milk to further thicken the stew. Sprinkle with fresh chopped parsley when ready to serve.

This entry was posted on Friday, March 15th, 2013 at 8:03 am and is filed under dinner, Holidays, Recipes, soup, St. Patrick's Day. You can follow any responses to this entry through the RSS 2.0 feed. You can leave a response, or trackback from your own site.