Happy New Year Everyone! The busy holiday season is finally over and I guess everyone is starting to get back into their old routines. Our holiday season was made particularly hectic due to our decision to go on a spur of the moment trip to Iceland. We had always wanted to visit Iceland and had briefly looked into flights, hotels etc., but it had always been a bit on the pricey side. When we arrived back from our October Ireland trip, I had read an article which claimed that this winter, visitors to Iceland would be much more likely to see the Northern Lights due to the current cycle of increased solar flare activity. That’s when I checked flights on a lark and found that not only were flights cheaper, but all of the hotels seemed to be running off-season special rates. I must admit, a few times I did think “Who the heck goes to Iceland in December?! Are we nuts?!” 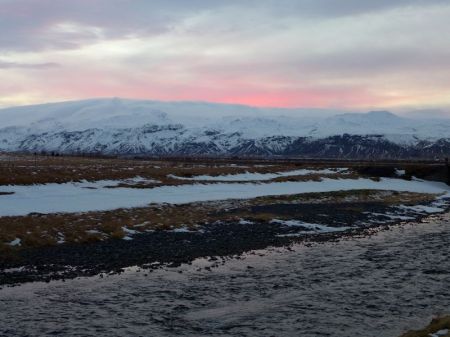 But I’ve got to tell you, it is fantastic!. We LOVED it! Actually, I probably should tell you it’s dreadful, cause we are definitely going back and I don’t want to let too many folks in on the secret. Sure, it is chilly, though not awfully so. It hovers right around freezing but the temperatures are often accompanied and shall we say enhanced by ever-present, kicking winds. There is also not a great deal of daylight. Although you will find 24 hours of daylight if you visit in July, in December it got light around 10:45 a.m. and was dark again around 4 p.m. Such limited daylight definitely forced us to plan out what we wanted to do during  the day and get to doing it before it was dark again. And we did get in quite a few adventures. We went horseback riding at Hestheimar Horse Farm.

Icelandic Horses were initially introduced to the country by Norwegian Viking settlers and the breed has remained pure for about 1000 years. These sturdy and hardy horses are very friendly and personable. They have an extra gait called a tölt which is essentially a fast walk. Tölting is a pleasure! Very smooth, much more comfortable for the rider than a trot. 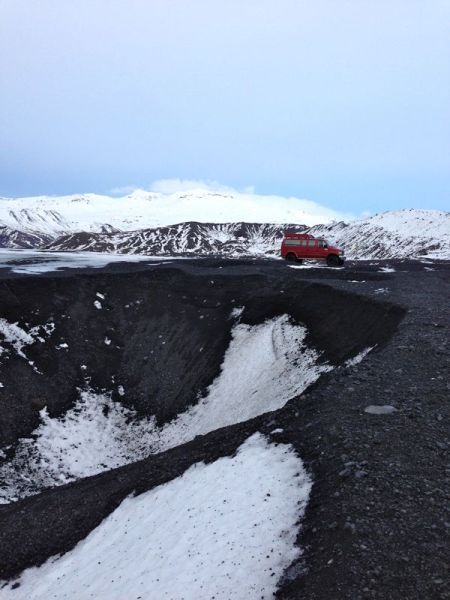 Super Jeep next to a crater created when Eyafjallajökull volcano erupted a couple of years ago.

We went on a Super Jeep tour of Þórsmörk (Thor’s Forest) with South Iceland Adventure Company (Thanks so much to Magnus, our guide) and saw waterfalls, and hiked through gorges, mountain passes and around on a glacier. 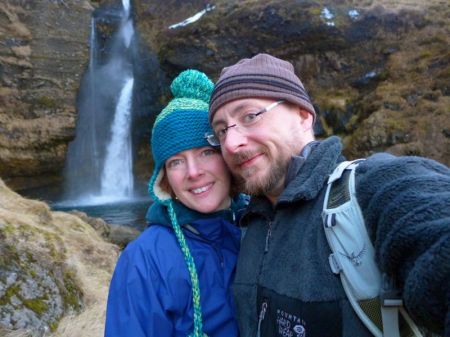 Inside a glacial ice formation.

We chilled out at the Blue Lagoon. Not the one from the 80’s with Brooke Shields, but a surreal geothermal pool and Spa located in a lava field in Grindavík about 40 minutes from Reykjavik. No description from me will do it justice. It really is other worldly. But let me just say… imagine a huge hot tub in the middle of a lava field with a swim up to wine/beer bar located in the center. Are you getting the picture? 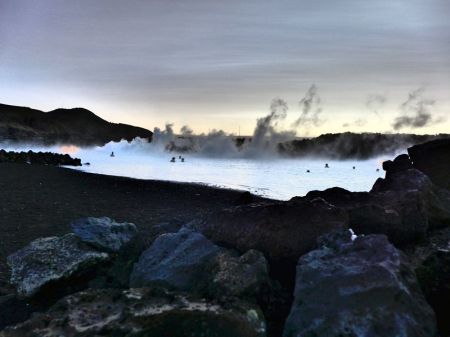 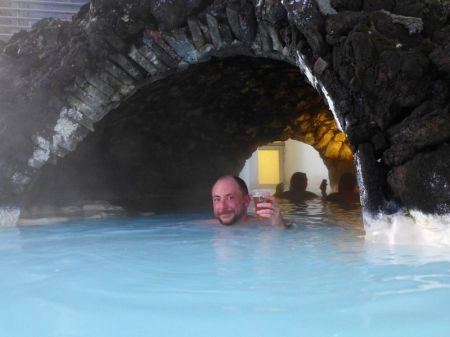 We went Snowmobiling with Mountaineers of Iceland on Langjökull glacier, the second largest glacier in Iceland. Very exciting, but even with the copious layers of thermals I was wearing, it was the absolute coldest I’ve ever been in my entire life! Though what would you expect, we were traipsing about on a huge slab of ice! 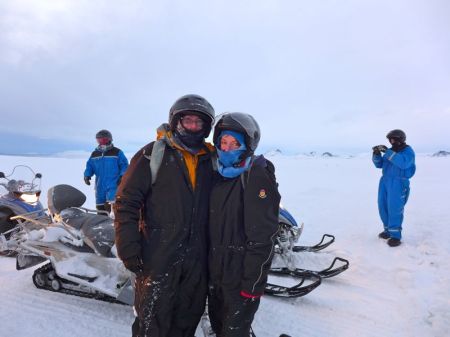 We stayed at Hotel Rangá. This gorgeous, cozy hotel, which is located out in the country (hence no light pollution), about two hours from Reykjavik, caters to folks hoping to get a glimpse of the Northern Lights and will give you a wake up call should you desire if the elusive lights do make an appearance. (seems like they mostly show up around midnight to 2 a.m.) We were actually lucky enough to see the Aurora put on a great show. 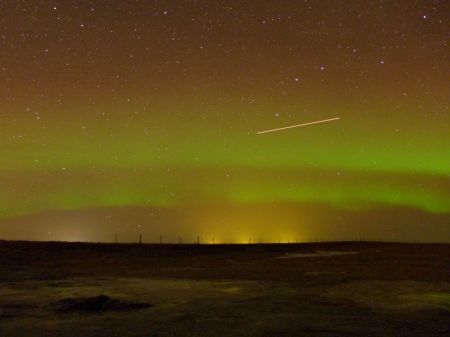 Northern Lights and a meteor from the Geminid meteor shower which was happening on the same night! 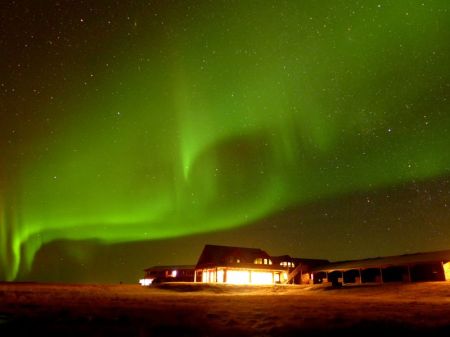 What is the food like you might ask. As you can imagine, the seafood is really outstanding! My husband, who is allergic to seafood, was not left wanting. There were plenty of non-seafood options available for him to choose from. One of his favourite meals of the trip was reindeer meatballs. All that being said, one of the most popular “restaurants” in Reykjavik, really isn’t a restaurant at all. It is a hot dog stand called Bæjarins Beztu which has been selling hot dogs or pylsur to Icelanders and tourists alike since 1935. Apparently Icelanders LOVE hot dogs and claim that theirs are the best in the world. Indeed, The Guardian designated Bæjarins Beztu as the “best hot dog stand in Europe”. Of course we made a beeline for the place as soon as we arrived in the city (as well as paying it a couple more visits while we were there). We weren’t disappointed! They serve some excellent hot dogs. These dogs have lamb added to the usual pork and beef and are smothered with ketchup, mustard, raw onion, crispy onion and a spicy remoulade. Delicious! 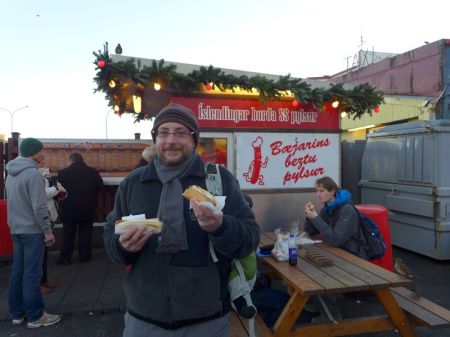 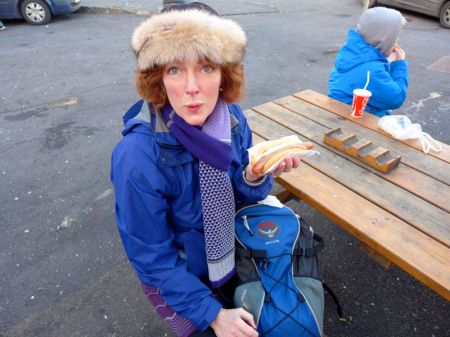 We are already planning our trip back this year and yup, in December! I’m sure at this point you are wondering if we are ever going to talk about the Kanilsnúðar recipe I’ve dangled so temptingly before you. So I’ll get right to it. Icelanders are really into Christmas. Christmas music plays non-stop. All the houses are completely decked out with lights. Everywhere we went, shops, bars, you name it, had Christmas cookies out for all to enjoy. I think I first tasted a Kanilsnúðar at the Heistheimar riding stables. It reminded me of a Snickerdoodle, but better, much more exotic and with a fun shape. Then I was able to find a bag of these darling little snails, the first of many bags consumed on the trip, in a local market and my obsession began. 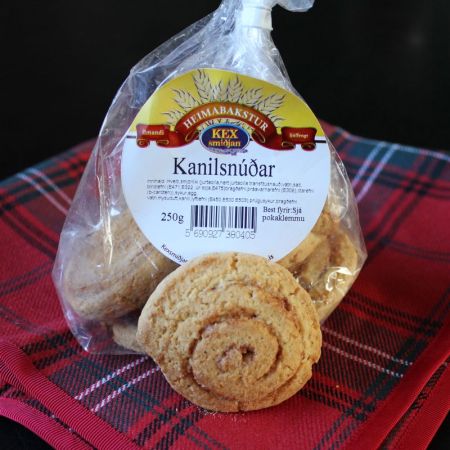 Once I got home, I looked about online and was able to find a couple of recipes. The one I really wanted to make called for the ingredient “Hartshorn” which I had never heard of. Further internet research revealed that Hartshorn is a rather old-fashioned leavener also known as Baker’s Ammonia. It is supposed to make baked goods rise higher than baking powder and make them extra crispy. I read that it was available in most Scandinavian shops. These establishments are a bit thin on the ground in Virginia, so I checked the King Arthur Flour site and sure enough they had it, so I placed my order. (If you would like to make these cookies without the Hartshorn, you can substitute 1/2 teaspoon baking powder and 1/2 teaspoon baking soda for the 1/2 teaspoon Hartshorn called for. This is said to yield similar results, but I did not try it.) For those of you who do manage to procure some Hartshorn, don’t freak out when you mix the cookie dough up. It will have quite a whiff of ammonia about it, but it goes away once baking is complete. I was quite happy with my little “cinnamon snails”. 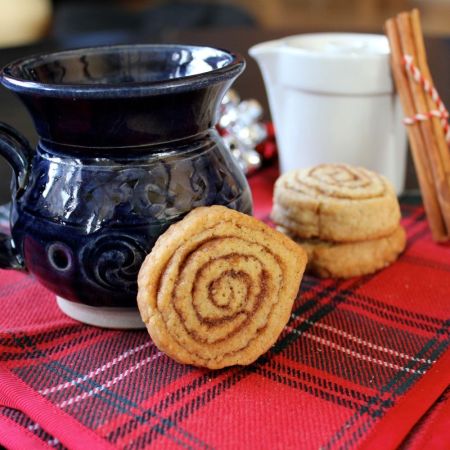 They are great with a cup of coffee or tea in the morning or as an afternoon snack. My husband likes them because they are not overly sweet, a quality which he seems to prefer in a cookie. I’m sure they have secured a permanent place in our Christmas cookie repertoire because they will always be a pleasant reminder of our dreamy first trip to Iceland. 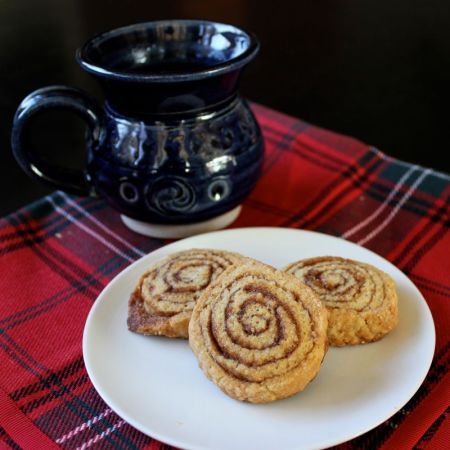 Mix cinnamon and sugar together until thoroughly combined. Set aside.

Place flour and hartshorn, sugar and salt in food processor. Pulse to mix. Cut cold butter into 1″ cubes and scatter over  the flour mixture. Pulse a few times until mixture resembles coarse little pebbles. Remove flour/butter mixture from food processor and place in bowl. Add the egg and vanilla and knead mixture until it just comes together to form dough. Pat dough into square shape and wrap with plastic wrap.

Place wrapped dough in the refrigerator for a couple of hours at least.

Remove dough from refrigerator. Flatten the dough quite thin and roll out evenly. Try to keep it an approximately square or rectangular shape.

Roll the dough up into a roll, then slice into approx. 1 cm thick slices.

This entry was posted on Tuesday, January 8th, 2013 at 10:19 am and is filed under Christmas, Cookies, Holidays, Iceland, Recipes. You can follow any responses to this entry through the RSS 2.0 feed. You can leave a response, or trackback from your own site.