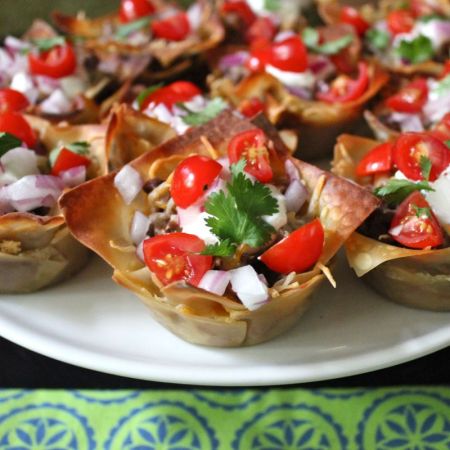 I had to get your attention with that title huh? Double decker…Taco…cupcakes?!! How much more goodness could you pack into four little words? I’m happy to report that these little fellas didn’t only sound good, they really delivered on taste as well. Back in February, I had tried out a recipe for Lasagna Cupcakes  which I had seen on the Girl Who Ate Everything blog. They were a huge hit. A couple of months later, I noticed that she had posted a recipe for Double Decker Taco Cupcakes. I have just been itching to try these out since then and finally had an occasion to make up a batch. I’m glad I did ’cause let me tell ya…folks went wild for them! 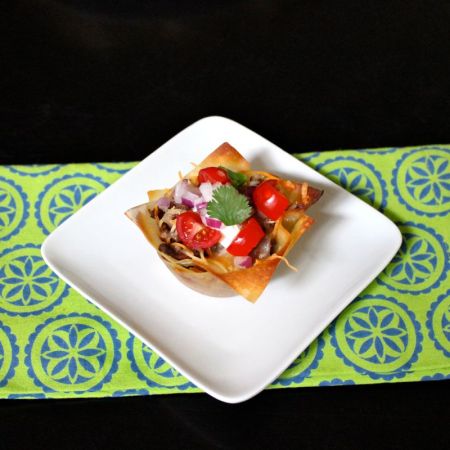 These Taco Cupcakes are quite similar to the Lasagna version, baked in cupcake tins with wonton wrappers, but this time filled with all kinds of taco-y ingredients like seasoned ground beef, refried beans, crushed tortilla chips and cheese. Once they’re out of the oven, you can sprinkle your favourite taco fixin’s on top such as sour cream, onions, jalapeno peppers, cilantro and avocado over the tops. They come together very quickly and easily. I assembled them earlier in the day and then baked them right before my guests turned up. They were great for dinner and would serve wonderfully as “finger food” at a larger party (perhaps a Cinco de Mayo gathering…). But don’t wait until May! Find a reason to make these soon!

recipe from: The Girl Who Ate Everything

Preheat oven to 350° F. And spray 18 wells of muffin tins with cooking spray.

Brown beef in a skillet and drain the fat. Add the taco seasoning mix and water called for on the package and simmer for 4-5 minutes. Set aside.

Bake for 15-18 minutes until golden brown.

Gently remove from muffin tin and top with your favourite taco toppings.

This entry was posted on Monday, August 20th, 2012 at 8:03 am and is filed under appetizers, Cinco de Mayo, dinner, Recipes. You can follow any responses to this entry through the RSS 2.0 feed. You can leave a response, or trackback from your own site.