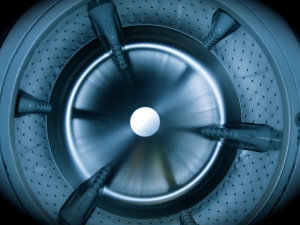 So I have a bit of a mystery. I think I may have figured it out, but am not completely sure. For a while now I’ve noticed little pin holes turning up in our cotton knits-mostly Jay’s t-shirts and occasionally my underwear. They’re kind of everywhere on the effected articles of clothing-not just in the same spot. It almost looks like its been shot with buckshot or something-a random scatter pattern -on the front, back, top and bottom. ONLY on cotton knits-not regular cotton clothing, wool etc. 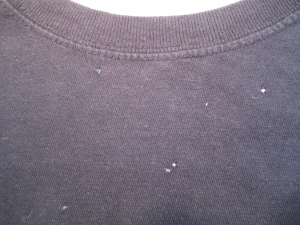 Kind of looks like moth holes huh? I thought so too and freaked out! Ick! Bugs? Are you kidding me?!!! I haven’t seen moths flying out of our dresser drawers, but was nervous so I decided to look online for help. I searched under “holes in clothing”. Woah! There were lots of people having similar problems. There is one site, Garden Web, which has been having people writing in about this since 2006! These folks are quite distressed and from time to time tempers flare. Let me tell you, there are tons of theories out there about what is going on. However, not everyone’s situation matches ours. For example, lots of people only seem to get holes in their shirts around the belly button area, which lead to a the “belly -button bug” explanation (Heeheehee!) So some victims of this phenomenon believe that there is some sort of bug, fungus, etc. that lives in our belly buttons and comes out from time to time to eat holes in our cotton knits. Hmmm……..Anyway, a more credible theory is that it is some sort of bug-not the dreaded belly-button bug- but moths or carpet bettles-are doing the damage. Indeed, one might not even see any evidence of moths flying around, yet they could still be there. However, the moth larva would leave little web like casings on the clothing or you might find some sign or bug bits-wings, body bits etc- in the bottom of the dresser drawers. Web looking stuff on clothing? Well, first of all let me just say that I am NOT a big fan of spiders. I’ve tried to make many treaties with them in the past. You know, like I see one in the house and don’t squash it immediately, but go to the trouble of capturing it to release it outside. I make sure I announce to my little prisoner of war “I’m going to let you go this time but you guys need to stay outside. I won’t bother you there, but you can not come into the house…. OR ELSE!” I’m hoping he will promptly tell all his spider cronies about the deal…..However, spiders are notorious treaty breakers. It hasn’t really worked out how I might have hoped. Soooooo…..believe me- if I ever saw web type things on our clothes I would assume that my old enemies had invaded and were living in my dressers. In which case I would undoubtedly be writing this blog from a nice relaxing institution somewhere. Needless to say, there are no web type cocoons on our clothes. I did pull all of our clothing out of the dressers and peer at the bottom of the drawers with a flashlight-no bug evidence anywhere. I quickly unfolded t-shirts-trying to sneak up on the bugs unaware-Nope, nothing.

So I went back to Garden Web to read that the new type front loading washers sometimes can cause the damage. They have all those little pin holes in the drum for extracting water during the spin cycle. The theory is that during spin cycles the clothing is pulled into the holes. Sometimes the holes are sharp but often it is just that the force of the spin is too strong and cotton knit fibers are broken in the process. In a knit of course this would result in unraveling and hence the holes. Bummer-I thought front loaders were supposed to be much more gentle on our clothes. As I read on I found that people also seem to think the new fangled HE detergents are too strong and though they get our clothes squeaky clean, while brightening whites and colors alike, they weaken the fibers and make breakage more likely to occur. What?! Is this some sort of conspiracy?!! So, I’m not really sure it is the washer, though I’m leaning that way over the bug idea. We have a Maytag Neptune Washer-front loading-from about 2000. It was here when Jay bought the house. The majority of the clothing that is effected is clothing we wear a lot and thus wash frequently. However, some of the items are rather new, so its not just like the clothing “wore out”. I don’t know what to do to be honest….do we need a new washer or an exterminator? Hmmm………. 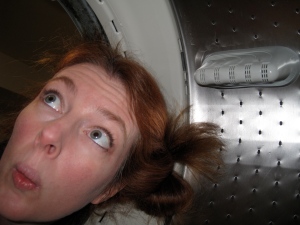 This entry was posted on Sunday, January 31st, 2010 at 10:55 am and is filed under Uncategorized. You can follow any responses to this entry through the RSS 2.0 feed. You can leave a response, or trackback from your own site.